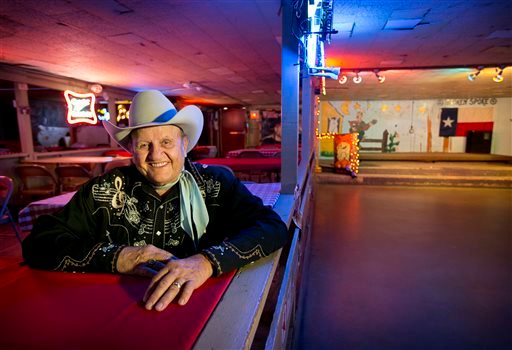 James White, who owned one of Austin’s most popular honky-tonks, the legendary Broken Spoke dance hall, died today from congestive heart failure complications, according to his daughter. He was 81 and died at his South Austin home.

White founded the Broken Spoke on South Lamar Boulevard in 1964, and it soon became a must-stop for the city’s musicians and tourists.

“He gave us a place to perform the music that we wanted to do in the atmosphere that we wanted — a Texas dance hall,” said Ray Benson, speaking to the Austin American-Statesman. “James was one of the most magnanimous and generally nice people — with a capital ‘N’ — in this world.”

The Broken Spoke was a mecca for top country talent. Among its performing alumni are Bob Wills, Ernest Tubb, Garth Brooks and the Dixie Chicks.

White was the quintessential honky-tonk owner, a gregarious sort always decked out in cowboy hat, jeans and boots.  He was known to lead his crowds in the Pledge of Allegiance while unfurling the family flag.

A lifelong Austin native, White briefly worked in California in the defense industry factories, then joined the US Army in 1961. After the military experience, he opened the Broken Spoke.

White booked western swing legends Bob Wills & the Texas Playboys in 1966, then brought in Willie Nelson in 1967. It began a tradition of better-known artists supplementing the younger local acts.

Nelson repaid the favor by filming parts  of his 1980 movie Honeysuckle Rose at the Broken Spoke. The venue was also the setting for a part of the Dolly Parton and Gary Busey film Wild Texas Wind in 1991, which featured the club’s regulars Asleep at the Wheel.

The venue was also memorialized in the 2016 documentary Honky-Tonk Heaven: Legend of the Broken Spoke, which chronicled the history of the family-run venue as seen through the eyes of the White family, musicians and dance hall patrons.

The Broken Spoke was featured on PBS’s Austin City Limits, the Country Music Television special Honky Tonk Sounds, as well as on the Discovery Travel Channel.

The Broken Spoke was inducted into the Texas Western Swing Hall of Fame in 2010. The club celebrated its fiftieth anniversary in 2014.

White is survived by his daughter, Ginny Peacock. No memorial plans have been revealed.