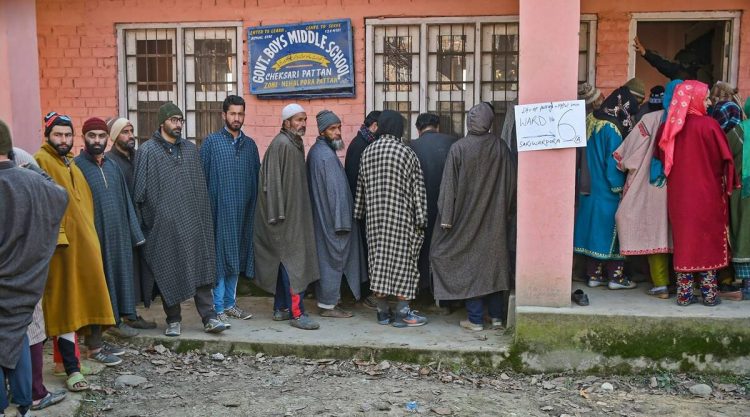 Residents stand in a queue to cast their vote during the 7th phase of the DDC polls at Mendhar in Poonch district on December 16. (PTI)

The elections to this third tier of the Panchayati Raj system were held for the first time in Jammu and Kashmir and were the first mass polls after the abrogation of provisions of Article 370 in August 2019.

Meanwhile, re-polling in four polling stations in Jammu and Kashmir’s Mendhar area of border Poonch district was held on Monday, with nearly 22 per cent of the electorate having cast their vote in the maiden DDC polls during the first two hours.

The UT’s State Election Commission had on Friday ordered re-polling in four polling stations following a report by the District Panchayat Election Officer, Poonch, Rahul Yadav, about incidents of “violence and unlawful activities” during the seventh phase held last Wednesday.

Jammu averaged above 60 per cent voting in all phases, noting its highest voting average of 72.7 per cent on Saturday.