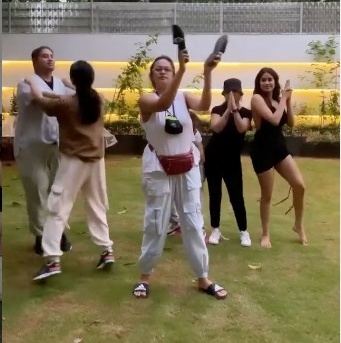 Janhvi Kapoor and her fun reels with her squad on instagram are quite famous. The actress is bang on with her social media posts! From giving a peek into her everyday fashion style to her family time and her fun banter with friends, her social media account boasts of all of these. The actress has now posted a reel on instagram on the viral #Temperature Challenge with her squad which is breaking the internet.

Sharing the video, she wrote,”Aksa gang is back. Miss u @mahnaz_kotwal.”

In the video, we can Janhvi grooving to the song Temperature by Sean Paul along with her squad. All of them are dancing like no one’e watching. Janhvi in a little black dress is showing some real funny moves making the video a hilarious one!

Brother Arjun Kapoor was quick enough to react to this quirky video and wrote, “Ummm this needs a separate whole dinner to discuss.”

The Kapoor family including Janhvi, Khushi , Anshula, Arjun and Boney Kapoor recently celebrated Father’s day where they all were seen posing for a happy picture together. Arjun posted the same on his instagram.

On the workfront, Janhvi’s next film is ‘Dostana 2’ which was in the limelight owing to its recasting. She will also be seen in ‘Good Luck Jerry’ which is a black comedy crime film directed by Sidharth Sengupta. It also features Deepak Dobriyal, Meeta Vashisht, Neeraj Sood and Sushant Singh. It is a remake of a tamil film Kolamavu Kokila.

Janhvi Kapoor and Her Squad are breaking the internet!!