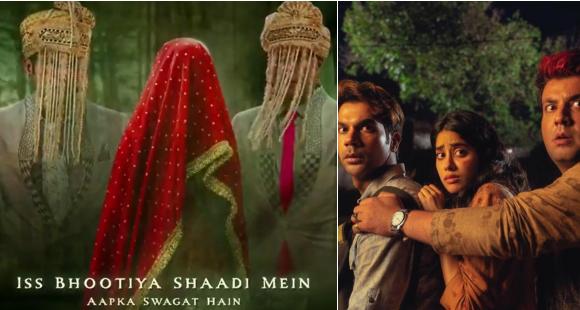 After going through another round of name change, Janhvi Kapoor, Rajkummar Rao, Varun Sharma starrer ‘Roohi’ is all set to release in theatres. The first look teaser was just released and it invites all to a spooky wedding with two grooms.

It has been a while since the theatres have been buzzing with audiences due to the COVID 19 pandemic. However, now, all set to end the despair for cinemas, Janhvi Kapoor, Rajkummar Rao and Varun Sharma”s horror-comedy is all set to release in March. Yes, today, the announcement regarding the new title of the film was made and it is now named ‘Roohi’ from Roohi Afzana. The film will star Janhvi, Rajkummar and Varun in the lead roles. It is all set to release on March 11, 2021.

Taking to her Instagram handle, Janhvi shared a snippet that featured her, Rajkummar and Varun with a backdrop of the scary woods. While Janhvi seemed to be in the look of a bride with her face covered, Raj and Varun were dressed grooms. Together, all of them invited audiences to the ‘bhootiya shadi’ that will take place on March 11 in cinemas. With it, they also announced that the film trailer will be out on February 16, 2021. The film was earlier titled ‘RoohAfza’ and the title was changed again to ‘Roohi Afzana.’

Taking to her Instagram handle, Janhvi wrote, “Iss Bhootiya Shaadi mein aapka swagat hai! #MagicOfCinemaReturns; movie releases 11th March.” Earlier, Pinkvilla was the first to inform you that Janhvi and Rajkummar’s horror film will hit the screens in March. A source told Pinkvilla, “It’s a horror comedy on the lines of Stree and the makers are extremely confident that the film will bring back the audience to the cinema halls. The Studio Partner, Jio, along with Dinesh have closed the terms and condition of theatrical deal with the exhibition sector and an announcement is underway very soon.”

The film is helmed by Hardik Mehta and produced by Dinesh Vijan under the banner Maddock Films. The shoot of the film has taken place in several locations including Manali and Uttar Pradesh. Originally, the film was supposed to hit the screens last year. However, due to COVID 19 pandemic and the theatre shutdown, it was postponed.