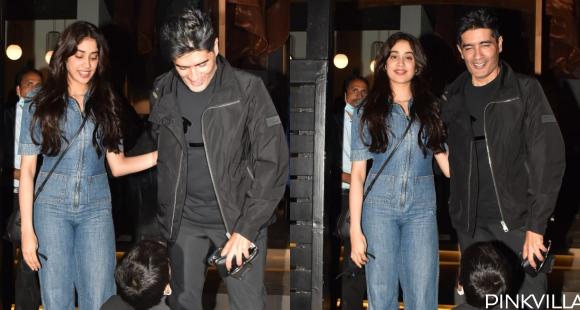 Janhvi Kapoor and Manish Malhotra stepped out for dinner last night in the city. while they were being snapped by the paparazzi, a cute fan interrupted and they met with him.

Actress Janhvi Kapoor recently returned to Mumbai after shooting for a few weeks in Punjab for her film, Good Luck Jerry. The actress had been busy shooting for the same over the past few weeks and her behind-the-scenes photos from the sets often used to surface on social media. Once back in the city, Janhvi caught up with her close friend and designer Manish Malhotra for dinner. The duo was seen making their way to a restaurant in the city.

The Gunjan Saxena star was seen opting for a chic look for dinner with Manish. In the photos, Janhvi is seen clad in a blue denim jumpsuit. With it, she teamed up a black mask and pair of heels. Her hair was left open and she was seen carrying a sling bag. On the other hand, Manish was seen carrying off an all black casual look for dinner with Janhvi. As the two came out of the restaurant, the paparazzi caught up with them.

Manish and Janhvi took off their mask to pose for photos. However, a little fan interrupted the photo session as he came and stood in front of them. The two looked adorably at the little boy and smiled. Meanwhile, on the work front, Janhvi was last seen in Gunjan Saxena: The Kargil Girl. The film was released on Netflix. Now, she will be seen in Good Luck Jerry. The film is a Hindi remake of a South film. It is helmed by Siddharth Sengupta. It was being shot in Punjab. However, owing to the farmers” protest, the location was shifted to Chandigarh. Besides this, Janhvi will be seen in Dostana 2 with Kartik Aaryan and Lakshya.