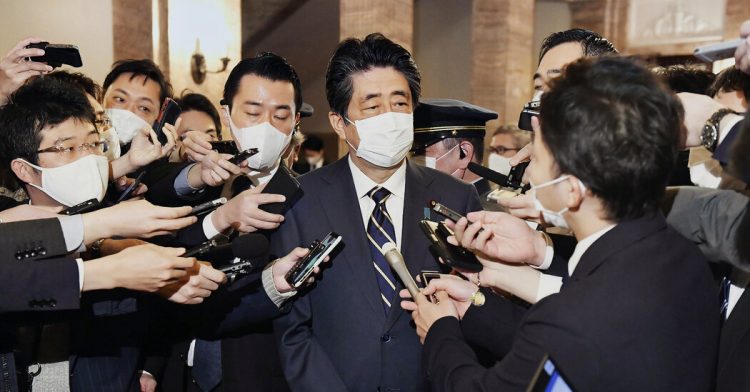 TOKYO — Prime Minister Yoshihide Suga of Japan apologized on Thursday for what he said were unintentionally false statements about a political spending scandal that has tarred the first months of his administration.

The apology came hours after Japanese prosecutors said they would seek to fine an aide to Shinzo Abe, the former prime minister, over alleged violations of political spending rules.

Prosecutors said Mr. Abe himself will not be charged in connection with the matter, an unusual statement that appeared to be aimed at quelling media speculation about his fate.

Mr. Suga, who succeeded Mr. Abe as prime minister in September, has not been accused of wrongdoing. Still, Mr. Suga spent Mr. Abe’s nearly eight years in office as his top spokesman and political fixer, defending him to the press and in Japan’s Parliament against accusations of wrongdoing.

The residue of Mr. Abe’s scandal — involving several alleged violations of the country’s election and political financing laws — has tarnished Mr. Suga’s administration, which is already reeling from public anger over its handling of the coronavirus. The prime minister’s poll numbers have dropped precipitously from a high of around 65 percent when he took office to 39 percent in a poll by The Asahi Shimbun, a daily newspaper, taken last weekend.

Prosecutors are calling for Hiroyuki Haikawa, a 61-year-old former aide to Mr. Abe, to be punished under an abbreviated legal process reserved for relatively minor infractions liable for fines under about $10,000. The announcement effectively ensures that the accusations will never be aired in a public court hearing.

Mr. Haikawa stands accused of underreporting by hundreds of thousands of dollars the true amount paid using campaign funds for banquets for Mr. Abe’s political supporters. The dinners were held over a period of four years at a luxury hotel in Tokyo ahead of an annual cherry blossom viewing party hosted by the prime minister.

Mr. Abe and Mr. Suga have both consistently denied any wrongdoing. But following the prosecutors’s announcement, both men found themselves apologizing for making false statements to Parliament, saying that they had unintentionally misrepresented the facts surrounding the scandal.

Speaking to reporters Thursday evening, a pale and trembling Mr. Suga said that in the process of defending Mr. Abe he had responded to questions from Parliament with “replies that differed from the facts. In regards to this, I express my deepest apologies to the nation.”

In comments echoing Mr. Suga’s, Mr. Abe apologized for previous statements about the scandal, which he said “were contrary to the truth,” but added that he had not been informed about the underreporting and that the inaccuracies were unintentional.

The amounts involved in the accusations against Mr. Haikawa might seem small by the standards of political corruption in other countries, but they were big news in Japan, where politicians have been booted out of office for seemingly minor violations of campaign finance rules, such as giving away potatoes.

The cherry blossom viewing party, which has been hosted by Japan’s prime ministers since the 1950s and is paid for with public funds, became the center of a major public scandal late last year when it was revealed that Mr. Abe and his allies had invited thousands of political supporters to attend over the years. Mr. Suga helped set the guest lists for the events.

The issue gained steam after officials revealed that they had shredded the proposed guest list for this year’s party after opposition lawmakers requested to see it. Demands for an inquiry followed, and the affair continued to haunt Mr. Abe until he resigned from office in September, citing health issues.

In a statement, prosecutors said that they would not pursue charges against Mr. Abe in relation to the banquets or cherry blossom viewing party because of lack of evidence.

Local media widely reported that Mr. Abe had submitted to voluntary questioning by prosecutors about the issue on Monday.

On Twitter, users pilloried the prosecutor’s decision to forego charges against Mr. Abe. Tweets demanding that authorities press charges trended on Thursday morning, accompanied by the hashtag “#abenomics,” a play on the name of the former prime minister’s economic revitalization campaign. Koichi Nakano, a professor of political science at Sophia University and a vocal critic of the former leader, said his Christmas wish was for Santa Claus to imprison Mr. Abe in the North Pole.

The indignation reflected widespread frustration with Mr. Abe, who had weathered several influence-peddling scandals during his time as the country’s longest serving prime minister — a record that he achieved on the back of strong economic growth, in part through his reform efforts and his skillful handling of President Trump.

Most famously, he was accused of the improper sale of public land at steeply discounted prices to a political ally. A government functionary caught up in the scandal committed suicide.

The scandals were never conclusively linked to the former leader, who has denied any wrongdoing, but they fueled surging public anger that nearly cost Mr. Abe his job.

His reputation had also been tarnished by his allies’s run-ins with the law. Earlier this year, Anri Kawai, one of his political protégés and the wife of a former minister of justice in his cabinet, was charged with buying votes to win election to the upper house of Parliament. She is currently on trial in Tokyo, where she has plead not guilty to the charges.