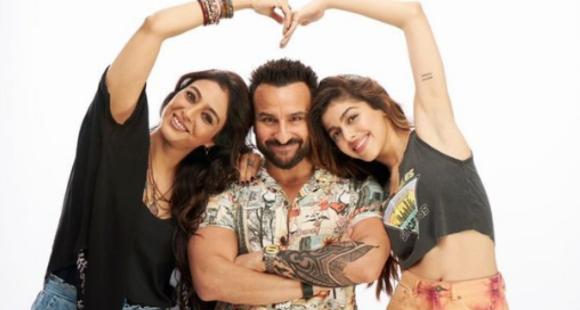 Saif Ali Khan, Tabu and Alaya F starrer Jawaani Jaaneman released in 2020, and today, it clocks 1 year. As the film completes its one year, we’ve got some interesting facts about it and the cast for you.

A year back, on the very same date, Saif Ali Khan, Tabu and Alaya F starrer Jawaani Jaaneman had released. The film had managed to create quite the buzz last year as it had an interesting star cast. Shot in London, the film revolved around a character named Jaswinder “Jazz” Singh, who is a 40-year-old playboy refusing to act his age. Played by Saif, the character instantly managed to click with the audience and the actor left quite an impression with his performance.

His life undergoes a complete change when he bumps into a young girl named Tia, played by Alaya, who happens to be his daughter. Having got the shock of his life, Saif”s character is seen trying to ace through some hilarious situations and we also get to see him opposite Tabu in the film, who plays Alaya’s mom and his former flame, Ananya. The film’s vibe appealed to the youth and the music too managed to leave fans in awe. Songs like Ole Ole 2.0, Gallan Kardi, Mere Baabula and Bandhu Tu Mera became popular. As the film clocks in 1 year today, we’ve got some interesting facts about Saif, Tabu and Alaya starrer.

1. Saif and Tabu paired opposite each other for the first time

Although we only get to see them as former flames in the film, Tabu and Saif have been paired opposite each other for the first time in Jawaani Jaaneman. As per reports, Saif and Tabu were supposed to be together in a film titled Shaadi.com in 2000. However, it was announced but never released. The duo has been a part of several films like Tu Chor Main Sipahi, Hum Saath Saath Hai and Biwi No 1. However, they were never paired opposite each other.

Alaya F stepped into the limelight with Jawaani Jaaneman. The starlet has a diploma in acting from New York Film Academy and also is a trained contemporary and kathak dancer. Her dancing skills were on display in the song, Gallan Kardi from the film. For her debut role as Tia, Alaya managed to leave an impact and she was praised by many for it.

3. Saif’s transformation to look younger for his role

For his role of a 40-year-old man, Saif had to lose weight. The actor was seen playing a man who refuses to accept his age in the film and hence, he had to look younger. For it, the actor lost 10-11 kilos and well, he surely managed to win over the audiences with his cool look in the film.

4. Namak Halal’s song Jawaani Jaaneman inspired the title of the film & the film is an official adaptation of an Argentinean film.

Saif, Tabu and Alaya starrer’s title was inspired by the 80s film, Namak Halal’s song Jawaani Jaaneman. The film had Amitabh Bachchan, Shashi Kapoor, Smita Patil and Parveen Babi in pivotal roles. The song features the gorgeous actress Parveen in the 80s flick. Not just this, Jawaani Jaaneman is an official adaptation of an Argentinean film, Igualita a mi. The film was released back in 2010 and the opening credits of Saif, Tabu and Alaya starrer reveal the same.

5. Alaya F was not the first choice for Tia’s role in the film.

Interestingly, Saif Ali Khan’s daughter Sara Ali Khan was offered the role played by Alaya in the film. As per reports, Sara was supposed to debut in Kedarnath with director Abhishek Kapoor. However, owing to several issues, the film was almost shelved and it was then that Saif offered Sara the role. However, Kedarnath went on to kick start again and Sara went on to debut in that film. The role finally went to Alaya and she managed to win fans over.

Also Read|Alaya F raises the temperature with her alluring PIC, says she can’t wait to unveil ‘exciting things’ for fans

X
WATCH: Shilpa Shetty jokes around with paps in Marathi, says ‘car door ref…GossipsShilpa Shetty, who will soon be making her comeback on the big screen, was in a goofy mood as always and interacted with the paps who snapped her on S…
close