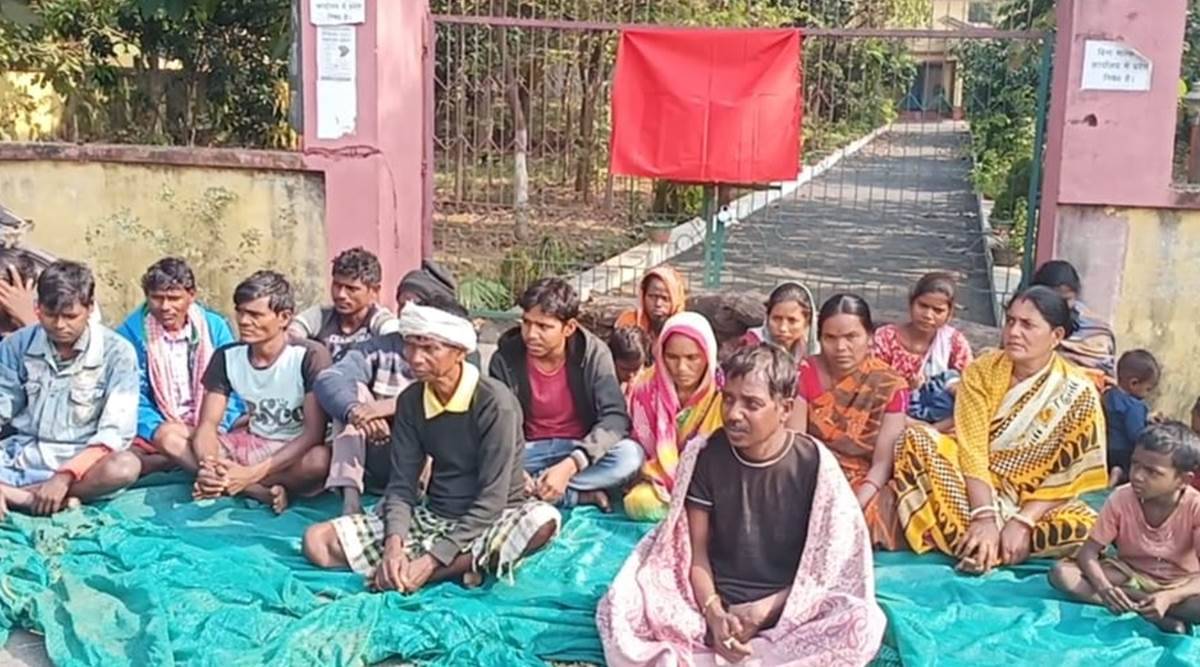 The workers said they live hand-to-mouth and have little option but to survive on loans. (Express photo)

Ram Hansda, a 32-year-old labourer from Durgapur in Pakur district of Jharkhand, had pinned his hopes of getting unpaid wages over nine months on a Public Interest Litigation (PIL) filed at Jharkhand High Court.

He is one of 250 workers, hired to ensure the upkeep of one range of Pakur Forest Division, who have not been paid their wages despite repeated letters to authorities concerned. In dire straits and desperate to be heard, many of these workers erupted in protest outside the Pakur Division Forest Office on Tuesday.

The workers said they live hand-to-mouth and have little option but to survive on loans. Hansda, who also cultivates paddy in his fields, said he lives off whatever he earns by selling his produce in the market. “I buy vegetables with the money I make from my produce. We are desperately short of cash. It would help if the forest department releases Rs 65,000 in unpaid wages. I hope the high court will resolve our problem at the earliest,” Hansda told The Indian Express.

He added that he slogged eight hours a day for nine months without pay. Others echoed his concerns, saying the situation has got progressively worse over nine months.

Hansda said Anil Kumar Singh, a forest range officer, used to help them with some money from his own pocket. However, it only brought them temporary relief.

Singh said he wrote several letters to the Department of Forest, Environment and Climate Change, underlining his plight. However, the letters drew no response. He then filed the PIL, seeking release of the unpaid wages. He said the money owed to 250 labourers since the Covid-19 pandemic broke amounts to Rs 10 lakh.

Singh’s petition says, “…that the non-payment of wages of the laborers as per the norms of the government, amounts to violation of the fundamental rights of the labourers.”

The wage issue assumes significance as the Jharkhand government recently brought labour reforms in the unorganised sector and workers engaged in projects of the Border Roads Organisation (BRO) were paid in full and on time. Chief Minister Hemant Soren, at a recent review meeting, directed the labour department to speed up implementation of various schemes.

Singh’s PIL blamed the wage delay on the ‘non availability’ of the divisional forest officer. It said Singh is being ‘compelled to give advances’ to labourers which is causing ‘great hardships’ to both the workers and himself. “That it has become difficult to remain in headquarters and keep the ‘mobile phone on’ due to lack of funds. The petitioner in person is not in a position to even fill the fuel in government vehicle and maintain the same to help combat the illegal transit of the timber, incidence of which is increasing day by day. That this attitude of the officers…is creating a bad image of the department.”

The plea also detailed the plight of a computer operator in a range office of Pakur Division, who, due to “non-payments of his wages”, turned “bankrupt” and had to take “loans to survive”. They (creditors) are now harassing the computer operator for money which is “demoralizing” him. The plea also said that the Pakur Forest Division is not manned with adequate number of “protective frontline forest staff”—only seven Forest Guards and two foresters – which is “not adequate for protection of the Forests and Wildlife of the Division”.

“So, 10 Home Guards have also been deployed to serve the Forest Division and the Wages and Ration Allowances of the same has not been paid to them from April, 2020 onward…They are facing a lot of problems which could have been avoided by posting suitable Officer to the post of the Divisional Forest Officer, Pakur even on addition charge, but repeated request to the authorities in power have failed to give any result,” the plea said. The it said there are multiple vacancies in other ranges as well.

It further said if labourers aren’t cared for, forest work gets affected. The plea said it is because of the “highly insensitive attitude of the authorities in power” that the matter hasn’t been resolved.

The High Court is yet to issue a notice on the issue.

The government assured necessary action in the matter. Principal Chief Conservative of Forests and Head of Forest Force (Jharkhand) PK Verma said he was “not in a position to comment” as he does not have the records with him. “I will comment once I get correct official information,” he said.

The labourers, on Tuesday, locked the Pakur Forest Division office, demanding their dues. They said that they don’t have money to feed their children.