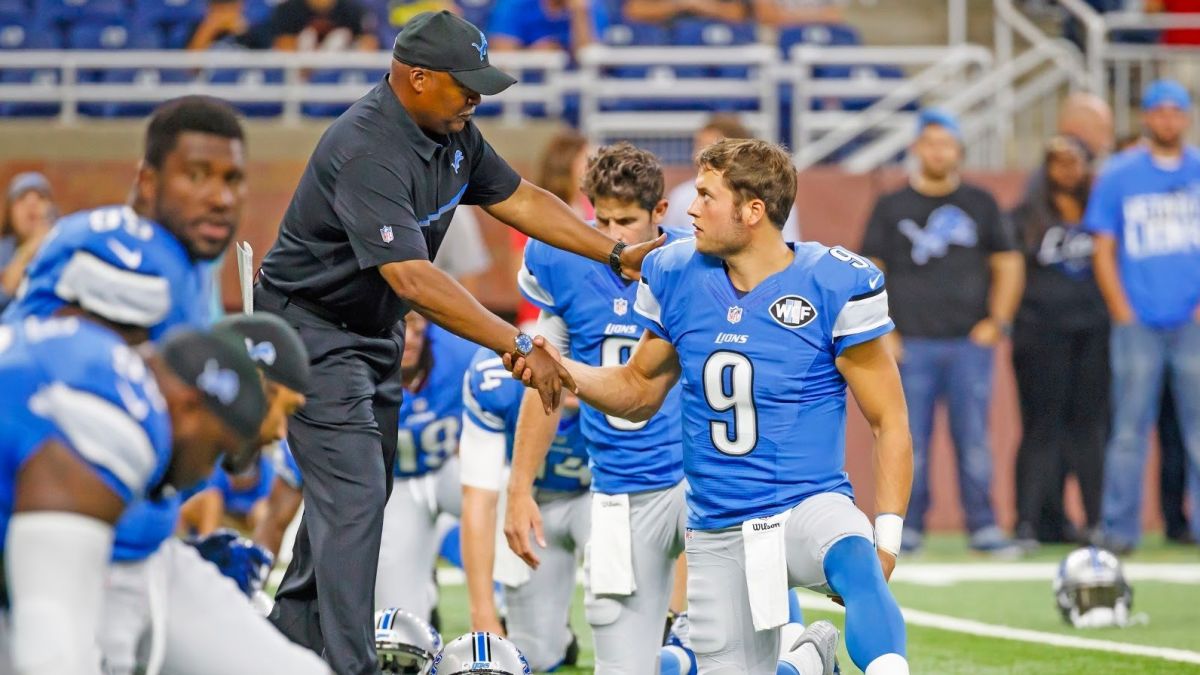 What can the Rams expect with Matt Stafford?

If you ask his former Lions coach and QB guru Jim Caldwell — the sky’s the limit. And his own past history suggests he is right.

When asked by Deadspin to share his thoughts on Stafford, Caldwell praised Stafford’s “mental and physical toughness,” “intellectual prowess,” and described Stafford’s character and leadership as much as his abilities.

“Matthew is accountable in every way and displays extreme ownership, accepting responsibility for his mistakes and deflects credit to his teammates and coaches in victory. He has an extremely strong arm, underestimated mobility and he can deliver the ball accurately with velocity or touch from various platforms and angles,” said Caldwell.

No one would know better of what Stafford is capable of than Caldwell, as Stafford thrived with him, as part of a coaching resume of QB success on three different teams.

If you want to predict Stafford’s future with Rams head coach Sean McVay, the best evidence is in the past with Caldwell.

The first thing Caldwell helped Stafford do is was the same thing helped a young Peyton Manning, do, serving as his QB coach – cut down on the interceptions. In between, as Ravens Offensive Coordinator Caldwell called all the plays on Joe Flacco’s 2002 magical Super Bowl run (11 TD/0 INT).

That’s significant, and not a little bit.

After the Lions went 11-21 from 2012-2013, Stafford’s stretches of greatness were also coupled with critiques of his fundamentals, footwork, arm motion, over-reliance on Lions Hall-of-Famer Calvin Johnson, and penchant to force throws into coverage for interceptions. Back then, some were asking “what to do when your star hits a wall?” Others have argued if he were Black, he might be treated more like Jameis Winston or Vince Young.

Under Caldwell, Stafford’s passer rating jumped from 83.1 in his first five seasons under Jim Schwartz to 93.7, and notably improved to 99.1 in Caldwell’s final 2.5 seasons after an adjustment period, and a new offensive coordinator Caldwell had previously mentored (Jim Bob Cooter).

These were meaningful ratings punctuated by 20 game-winning drives, a stat Stafford led the NFL in three of those four seasons. Under Caldwell, Stafford was 22-15 in close one-score games, but 20-33-1 without Caldwell. “He’s a smart offensive coach,” Stafford told the Detroit Free Press in 2017. “He puts our team in the right situations to succeed, and that, in turn, helps me out.”

Caldwell employed more quick throws, no huddles, and instead of forcing throws to Calvin Johnson amidst double/triple coverage, he used Stafford in more of a spread offense with multiple wide receivers where he was most comfortable. Golden Tate would immediately blossom into a Pro Bowler in 2014, and post his only three 1,000-yard seasons. Despite Johnson’s surprise retirement after the 2015 season, Stafford’s growth continued as Marvin Jones would join Tate as a 1,000-yard partner in 2017.

Pro Football Focus predicted the Lions would win four games in 2016 and six games in 2017. By any objective measure based on roster talent, the Caldwell/Stafford 9-win teams in both 2016 and 2017 were minor miracles, masking monster holes which included an invisible pass rush, back-up running backs as starters (Ameer Abdullah/Theo Riddick/Zach Zenner), and a lack of Pro Bowl playmakers, a staple of playoff teams.

Well, those holes have just been repaired. How will Stafford adapt to a new team?

“Matthew is extremely bright and he can adapt to any system or style of offense,” says Caldwell. “He has demonstrated [that] while in Detroit under multiple offensive coordinators and head coaches.

“He will be able to do whatever Coach McVay requires. But Matthew is very self-aware and not shy about expressing the various concepts that fit his eye or accentuates his skill set. They will love him in L.A.”

This is not undue biased praise. A closer look at the Caldwell/Stafford Lions years supports his assessment.

The Rams need not tweak too much. Stafford can be a great successful QB under McVay because he already was under Caldwell with far less surrounding talent — except in glimpses.

Stafford is leaving the Lions’ last-place defense to join last year’s No. 1 defense anchored by superstars Aaron Donald and Jalen Ramsey. The only year Stafford played with a top defense was Caldwell’s first year in 2014 when the Lions went 11-5 with a No. 3 ranked defense up from No. 15 the previous year.

That Lions defense was anchored by the closest thing to Donald in 2014 – Ndamukong Suh. But the Lions failed to re-sign Suh the following year, and haven’t had a pass rush since. Stafford has been having to gun sling the Lions to victory since. No more.

“Caldwell was the answer,” tweeted Ndamukong Suh in October, “and didn’t get the ample opportunity to fully put his fingerprints on the team”.

No, he didn’t. But McVay will.

The Rams adding a 2017-level Stafford to his 2014 Lions defense can be a Super Bowl recipe.

The Rams will have the type of support for Stafford he has never had in his Lions career — a rushing attack. The Rams rush-by-committee very quietly gained over 2,000 yards last year, a mark the Lions haven’t even sniffed since Barry Sanders.

Running back was the Lions’ greatest need in the 2017 draft, but GM Bob Quinn chose Florida linebacker Jarrad Davis and Florida corner Teez Tabor in the first two rounds over Dalvin Cook and Alvin Kamara — the next two running backs taken after those picks. Davis was no longer a regular starter in 2020, and Tabor is out of the NFL.

Instead of drafting better, Bob Quinn fired Caldwell despite mass support from his players.

Quinn now famously said “9 wins are not enough” before hiring his buddy Matt Patricia. Under Patricia the Lions also only managed nine wins – except it took him two years.

The answer should be obvious. When a coach with 6-win talent wins nine games, you give them more talent to reach the Super Bowl — a place Caldwell visited as Head Coach, Asst. Head Coach, and Offensive Coordinator on three prior occasions.

If Quinn’s hiring of Patricia was classic NFL nepotism, Caldwell being snubbed by the rest of the NFL for four hiring cycles is classic NFL racism. Caldwell’s success with Peyton Manning, Flacco, and Stafford trebles the kind of success that stamps white QB guru coaches with indelible “genius” labels by the media, and lifetime employment in the league.

In contrast, the Rams’ front office is willing to go all-in and trade for playmakers, as they did in acquiring Jalen Ramsey, and trading two first-round picks to the Lions for Stafford, a likely win-win for both teams.

“Matthew is a great leader with an insatiable desire to win,” says Caldwell (preceding the article). “Insatiable” is a strong word. Caldwell added: “The Rams are getting a great father, husband and extraordinarily unselfish teammate who serves the community in which he lives and works.”

That leadership was on display in 2020, as Stafford became the highest-profile white player to take a knee in solidarity with his Black teammates during multiple games. Stafford wrote an article in The Players’ Tribune called: “We Can’t Just Stick to Football”.

“Police brutality, white privilege, racism — it’s all real.” wrote Stafford. “It’s time we stop pretending, or defending, or just closing our eyes to what’s right in front of us. And it’s not like this is just our history. This is right now.

“These are not political problems. These are human problems. It should not be seen as a political statement to discuss this stuff honestly.”

Either way, Stafford is displaying what leadership looks like, and despite “media-distraction” lies about Colin Kaepernick supposedly dividing the locker room, his own 49ers teammates voted him a leadership award as the best teammate in 2016. Has the media considered Jared Goff standing while surrounded by his Black Rams teammates kneeling to be more divisive to his team?

Upon arrival, Caldwell said Stafford had the skills to be great, and by 2016 Stafford was already being discussed as an MVP candidate. Back then Caldwell said Peyton Manning “will be certainly donning a Hall of Fame jacket, and another one who’s well on his way.” The other one was Stafford.

Should the Rams head back to the Super Bowl, Sean McVay will not have to adjust much except to let Stafford be the quarterback he already was. And he might want to start by giving Jim Caldwell a call.

Who knows, if they become friends, an NFL team might even hire him.