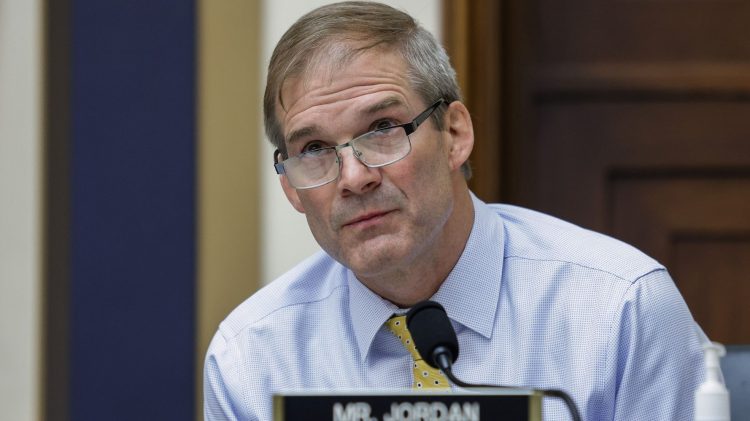 Rep. Jim Jordan (R-Ohio) was offered a history lesson on Twitter after he fretted over stay-at-home orders imposed to limit the spread of the deadly coronavirus ravaging the nation.

“What would the Founders say?” the congressman asked on Twitter.

Amid spiking COVID-19 cases and hospitalizations, several states have tightened restrictions, ordering businesses to close and asking residents to stay at home. In Jordan’s home state of Ohio, Republican Gov. Mike DeWine has extended a nighttime curfew through Jan. 2 and suggested he might soon close bars and restaurants.

Jordan has repeatedly expressed skepticism about the severity of the pandemic. Earlier this month, he mocked the nation’s top infectious disease expert, Dr. Anthony Fauci, for his plea that Americans avoid Christmas travel.

December has been the deadliest month of the pandemic yet for the U.S. More than 60,000 deaths have been recorded this month alone.

60 million Americans are subject to a stay at home order or curfew.

11 million are right here in Ohio.

What would the Founders say?

Critics noted that the Founders had in fact followed strict measures to stifle infectious disease outbreaks based on the science of their time.

During the American Revolution, George Washington worked to contain a smallpox epidemic by isolating anyone suspected of infection and limiting outside contact with his army. In 1776, when the British withdrew from Boston, Washington mandated that only soldiers that had already been infected be allowed into the city.

In 1796, in response to a deadly yellow fever outbreak, Congress passed the first federal quarantine law, which was signed by Washington. It authorized the federal government to help states enforce quarantines as necessary.

George Washington established quarantine guidelines, travel bans and isolated those infected with smallpox during the Revolutionary War-the colonists even passed a law in 1731 that made reporting the illness mandatory.

Had they denied it, like you are, none of us would be here. https://t.co/Csp4VIaKcz

There was a massive smallpox epidemic during the American Revolution.

Washington quarantined the infected, refused to let people from hot spots travel to his army, and even sent a thousand soldiers to Boston to prevent the spread there.

You should try reading a book sometime.

The founders would probably have taken sensible precautions.
When Philadelphia, the US capital, had a yellow fever outbreak in 1793, Washington and pretty much the entire federal government left the city. https://t.co/yUeesR8mMr

The Founders passed An Act Related to Quarantine during the 3rd Congress in 1796, signed by PRESIDENT GEORGE WASHINGTON.

It directed the feds to help states enforce quarantines.

Also, Jacobson v. Massachusetts, 197 U.S. 11 (1905) would’ve also enlightened you to the state police powers, like Gibbons, in prioritizing health during emergencies and that individual liberty is not without limits.

This is why we shouldn’t elect wrestling coaches to be in congress if they have no passed a basic history and civics course first. Boston had a complete lockdown in 1778 after a smallpox outbreak. Many of the founders were there. They abided by it for months.

Probably the same thing since a founder literally dealt with a pandemic pic.twitter.com/ClRwonBQqt

They would likely approve. Washington used variolation & isolation to protect his soldiers. Quarantine was common due to outbreaks of smallpox, measles, yellow fever, and more. They understood the seriousness of infectious disease & the nascent science behind its control. https://t.co/QZ9dKbHZgX

It would have taken you less than a fucking minute to google this shit and discovered that George Washington ordered quarantines during the small pox epidemic in the 1770s-80s. https://t.co/yks6gYi9QJ