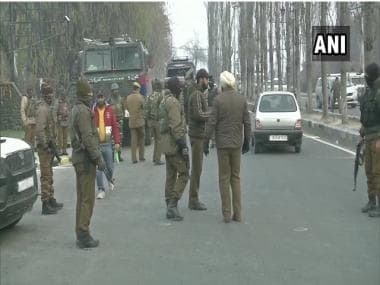 The BJP has surged past others in Jammu Province as it was ahead in 57 seats, while the Gupkar alliance led in 37. In Kashmir, the regional coalition was leading in 71 seats, with the BJP was trailing far behind at three

The People’s Alliance for Gupkar Declaration (PAGD), a coalition of seven political regional parties, has won over 80 seats while the BJP emerged as the single largest party winning 56 seats as of now. The counting of votes for the 280 District Development Councils (DDC) in Jammu and Kashmir is still underway. Meanwhile, as many as 37 seats were bagged by Independent candidates, while the Congress party won 19 seats.

According to NDTV,  in the first-ever District Development Council (DDC) polls in Jammu and Kashmir, regional parties have surged ahead in Kashmir while the BJP kept an upper hand in the Jammu region.

As per PTI’s latest trends, the PAGD, which includes the National Conference and Mehbooba Mufti’s People’s Democratic Party, was ahead in 81 seats and has won 30 thus far. The BJP is leading in 56 and has won eight seats till now. The Congress is leading in 19 seats and had bagged four seats so far.

The BJP has surged past others in Jammu Province as it was ahead in 57 seats, while the Gupkar alliance led in 37. In Kashmir, the regional coalition was leading in 71 seats, with the BJP was trailing far behind at three.

Counting of votes for the eight-phase elections began at 9 am at the district headquarters. A total of 2,178 candidates were contesting in these elections: the first since the erstwhile state lost its special status under the Constitution on August 5, 2019.

There are 280 DDC seats: 14 in each of the 20 districts of the Union Territory. The DDC election is being seen as a fight between the BJP and other political parties in the region.

The elections to this third tier of the Panchayati Raj system were held for the first time in Jammu and Kashmir and were the first mass polls since the abrogation of Article 370 in August 2019.

The polling was held over eight phases beginning of 28 November and ending on 19 December as 51 percent of the 57 lakh eligible voters exercised their franchise in the elections, which were largely peaceful.

Seven Kashmir-centric mainstream political parties, including the National Conference and the Peoples Democratic Party, contested the polls in an alliance under the banner of the Peoples Alliance for Gupkar Declaration (PAGD) formed for the restoration of Article 370.

The Congress was initially a part of the PAGD but distanced itself from the alliance as the BJP targeted the Opposition party for being in league with the ‘Gupkar Gang’.

Although Congress went alone in the last seven phases, it is widely believed that its understanding with the PAGD remains intact.

PDP youth president Waheed Para, who is in the custody of the National Investigation Agency for alleged links with militants, won the DDC elections from Pulwama district in Jammu and Kashmir. Para defeated BJP candidate Sajad Ahmad Raina.

PDP president Mehbooba Mufti said she was proud of her party’s youth leader to register a win.

Couldn’t be prouder of PDPs @parawahid who won his maiden election by a huge margin of votes. Despite being arrested on baseless charges right after filing his nomination people have shown their love & trust for Waheed. Hope justice prevails. pic.twitter.com/MOU8gNUOic

Para was arrested by the National Investigation Agency (NIA) on 25 November, a few days after filing nomination papers as a People’s Alliance for Gupkar Declaration (PAGD) candidate.

The NIA claimed Para was arrested in connection with the Naveed Babu-Davinder Singh case for supporting Hizbul Mujahideen in conspiracy with the other accused persons.

Para was considered to be a key motivator for youth to join mainstream politics in Pulwama and adjoining Shopian districts of south Kashmir when militancy was raising its head there again.

As secretary of Jammu and Kashmir Sports Council from 2016 to 2018, Para played a major role in organising sporting events in the nook and corner of the erstwhile Jammu and Kashmir state which included the Ladakh region.

The Bharatiya Janata Party on Tuesday won an election in Kashmir for the first time as its candidate Aijaz Hussain bagged the Khonmoh-II District Development Council seat in Srinagar, PTI reported.

Meanwhile, Vibodh Gupta, the party’s Jammu and Kashmir unit general secretary claimed that the results of the polls were a reflection of people’s faith in Prime Minister Narendra Modi’s leadership.

“The people of Kashmir exhibited their faith in PM Narendra Modi’s vision of Naya Kashmir, and sabka saath, sabka vikas, sabka vishwas,” Gupta said. Commenting on Hussain’s victory, in particular, Gupta said that it belongs to party members in Kashmir “who have shed their blood fighting a tough battle against terrorism”.

“BJP’s maiden victories in DDC elections in Kashmir speak of two stories: one of a tough fight by the Bharatiya Janata Party, marking the beginning of a new era in the Valley, and the other of conveying a strong message to Gupkar Gang [Gupkar Alliance] that the end of their communal and divisive politics is near,” he added.

‘People have given full support to Gupkar alliance’

National Conference vice-president Omar Abdullah on Tuesday said people from Jammu as well as Kashmir have extended complete support to the Gupkar alliance and endorsed its plan seeking restoration of Jammu and Kashmir’s special status by giving a befitting reply to the BJP in the DDC polls.

His remarks came amid the counting of votes of the District Development Council (DDC) elections.

Abdullah, who is a former chief minister, told PTI that the results and trends are an “important milestone” for the PAGD as they endorse “our view” that revoking of special status was not acceptable to the people.

“Now if the BJP and its proxy political party believe in democracy, as they have stated, they should immediately reverse its decision (abrogation of special status) and respect the verdict of the people of this region,” he said.

A day before the counting of votes in the District Development Council (DDC) polls in Jammu and Kashmir, authorities on Monday took into preventive custody at least 20 political leaders, including three senior PDP functionaries.

PDP president and former chief minister Mehbooba Mufti described the detention of her party leaders as “out and out gunda raj” and accused the BJP of planning to “manipulate” the results.

Officials said the authorities took 20 leaders, including Sartaj Madni, Mansoor Hussain, and Naeem Akhtar of the PDP, into preventive custody during the day.

Similar action is being taken against mainstream politicians in other districts of Kashmir valley as well, the officials said.

Mehbooba said, “Total lawlessness as PDP’s Sartaj Madni & Mansoor Hussain have been arbitrarily detained today on the eve of DDC election results. Every senior police officer here is clueless as it is ‘upar say order’. No rule of law in Jammu and Kashmir anymore. It is out and out gunda raj.”

Madni, a former deputy speaker of the erstwhile Assembly of Jammu and Kashmir, is also Mehbooba’s uncle, while Hussain is a former MLA. Both the leaders are from south Kashmir.

J&K admin is on an arrest spree today. PDPs Nayeem Akhtar too has been abducted by J&K police & is being taken to MLA hostel. Looks like BJP is planning to manipulate DDC results tomorrow & don’t want any resistance. Democracy is being murdered in J&K.@manojsinha_@JmuKmrPolice