In a two-page letter to J-K Election Commissioner KK Sharma, Farooq Abdullah said providing security to a select few and literally interning the rest is a gross interference in democracy 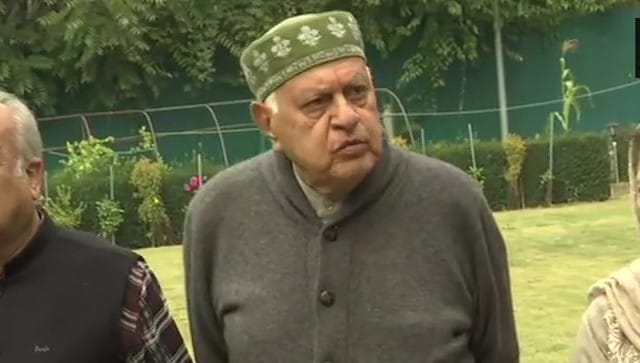 Srinagar: Former Jammu and Kashmir chief minister and president of newly cobbled up People’s Alliance for Gupkar Declaration (PAGD) Farooq Abdullah on Saturday objected to the treatment meted out to the amalgam candidates, saying security is being used as a pretext to impede and customise democracy in the Union Territory.

In a two-page letter to J-K Election Commissioner KK Sharma, Abdullah, who is at present a Lok Sabha member from Srinagar, said providing security to a select few and literally interning the rest is a gross interference in democracy.

“I am taking the liberty of writing to you about the upcoming DDC elections. A strange and unique feature has come to the fore. Candidates put up by the PAGD are immediately whisked away to “secure locations” in the name of security and confined to those “secure locations”. They are not allowed to canvass, they are completely out of touch with those from whom they are supposed to seek votes,” Abdullah said in the letter.

He said the parties part of the PAGD have been in power in the past and have had the opportunity to head and run the government and are aware of the challenges posed in the realm of security in a place beset by violence.

“These challenges are not new, but have been painfully persisting for the last three decades. But, the government had structures in place which ensured security for all contestants irrespective of the ideology they espoused or the parties they represented,” he said.

The Lok Sabha MP said the current state of affairs in the realm of security is “blatantly oriented” towards providing security to a select few and confining others.

Asserting that the evolution of democracy in Jammu and Kashmir is distinctive compared to any other part of the country, Abdullah said this evolution is a “bloodied journey”, soaked in the blood of thousands of political workers who have laid down their lives for the sake of democracy.

“It is a desecration of those sacrifices when the very conflict that consumed their lives is used as an alibi to customize democracy. Democracy is still in a state of fragility in Jammu and Kashmir.

“Governments come and go. No government has the right to alter the institutional foundations of democracy in J-K, nourished by the sacrifices of thousands of political workers,” the letter read.

He said while security is a challenge and it is for the government of the day to counter that challenge in a manner which is fair and transparent, “providing security to a select few and literally interning the rest is a gross interference in democracy”.

The PAGD president”s letter to the State Election Commissioner comes in the backdrop of allegations of major political parties in the valley, including the NC and the PDP, of not having a level-playing field for the elections. The parties have accused the administration of locking up their candidates in accommodations at several places and not allowing them to campaign.