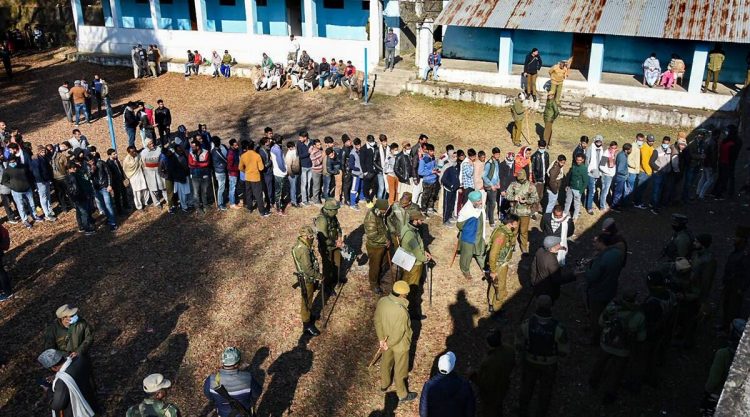 Residents stand in a queue to cast their vote during the seventh phase of the elections for DDC polls at Mendhar in Poonch district on December 16, 2020. (PTI Photo)

Re-polling in four polling stations in Jammu and Kashmir’s Mendhar area of border Poonch district opened on a brisk note on Monday, with nearly 22 per cent of the electorate having cast their vote in the maiden District Development Council (DDC) polls during the first two hours.

Sources said 24.7 per cent voters had exercised their right to franchise in Mendhar A and 19.4 per cent in Mendhar B till 9 am. The repolling had started at 7 am.

The UT’s State Election Commission had on Friday ordered re-polling in four polling stations following a report by the District Panchayat Election Officer, Poonch, Rahul Yadav, about incidents of “violence and unlawful activities” during the seventh phase held last Wednesday.

The repolling will be held till 2 pm, and the counting of votes polled there will be done along with rest of the DDC as per original schedule on December 22.