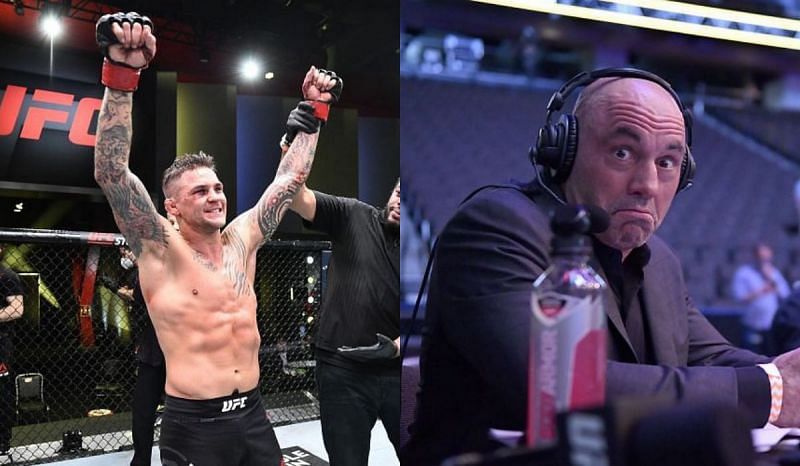 Dustin Poirier had a surprising appearance in the night’s main event against the former UFC double champion, knocking him out during the second round. In their rematch, “The Diamond” displayed how much he had evolved since their first encounter back in 2014.

Rogan made a post to his Instagram account praising Dustin Poirier for his performance against McGregor and affirmed that if Khabib Nurmagomedov is not returning from retirement, Dustin Poirier should receive the UFC lightweight title.

“A tremendous congratulations to Dustin Poirier for his spectacular victory last night. At 155 lb, he is absolutely one of the most fierce fighters on earth, and if Khabib [Nurmagomedov] really is retired, for my money, Dustin is the uncrowned champ!” wrote Rogan.

After the defeat, McGregor asked Dustin Poirier for a third fight that would put an end to their dispute and, at the same time, crown the lightweight champion. However, there are many other competitors with strong claims to the title fight.

Michael Chandler’s win over Dan Hooker at UFC 257 positioned him as a fair competitor for the 155 lb belt. Charles Oliveira and Justin Gaethje are other fighters with solid chances of clashing against Dustin Poirier at the title fight.

After beating Conor McGregor at UFC 257, Dustin Poirier made a puzzling threat directed at No. 1 featherweight and former lightweight title contender, Max Holloway.

Dustin Poirier used his post-fight interview to remember Holloway of the two times they faced each other inside the octagon – two victories to “The Diamond.” He provoked Holloway by saying that he proved to have one of the best counter boxers in the UFC.

“I think I showed a little bit of counter boxing here. I know Max Holloway thinks [that] he has the best boxing [in the UFC], but I have got two wins over the kid… Nothing but respect to him, I am a big fan, but I have beat him twice. And I felt like I was boxing pretty well with Conor here,” said Dustin Poirier.

With Dustin Poirier virtually guaranteed to have a title fight next, it remains to be seen who the UFC will choose as his opponent. There are numerous fighters hungry for this title shot, including McGregor.

Who would you like to see Dustin Poirier fighting for the UFC lightweight belt? Sound off in the comments.

X
Women and Black assistant coaches will be on display in the Super (Minority) Bow…SportsIllustration: NFLAs “Black Monday’’ sits in the NFL’s rear-view mirror, the ongoing conversation around the lack of African-American head coaches cont…
close