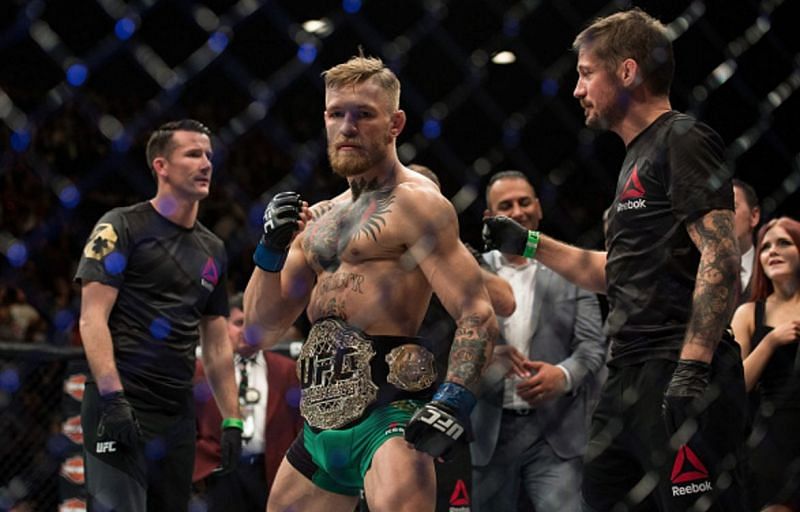 Conor McGregor’s long-term coach John Kavanagh was in conversation with Ariel Helwani a day after the Irishman’s stunning UFC 257 defeat. During the discussion, Kavanagh reflected on a host of topics surrounding the first UFC pay-per-view of 2021 and even went on to reveal what’s next in store for McGregor.

With Dustin Poirier’s win at UFC 257, the score is tied at 1-1 between him and The Notorious One. And, Coach Kavanagh has suggested that Conor McGregor is already going around “harassing” people to get a third fight with The Diamond.

Conor McGregor’s loss to Dustin Poirier was the first TKO loss of his career. Initially, the former UFC lightweight champion had an excellent start to the fight and had a solid first round. But, kudos to Poirier for turning the bout around in round two and eventually sealing the victory by damaging McGregor’s calf.

With Dustin’s leg kicks doing the damage, the former interim lightweight champ unloaded a barrage of strikes on McGregor, forcing ref Herb Dean to call the fight. John Kavanagh has now revealed that Conor McGregor is aiming to return before the summer and his main goal is to cross paths with Poirier for the third time.

For the trilogy fight, Conor McGregor has seemingly proposed the idea of a UFC lightweight title fight.

“He’s already harrasing everybody to get th rematch. We would love the rematch, I don’t think Dustin is against that. If we could ger the rematch before the summer, that’d be amazing. If it’s not to be, I guess I don’t really know. Maybe he drifts off into the boxing.”

Thanks for the support everyone! Was not my night/morning in there but a great contest to improve on. I’m excited at the blockbuster trilogy I now have on my hands. Dustin is a hell of a competitor and I look forward to going again. God bless us all, happy Sunday ❤️

Conor McGregor has made it clear that he wants to stay active in the UFC for the rest of 2021. The Notorious One has promised that he will return to the octagon once again this year, but it remains to be seen if he will stay true to his word or not.

A third fight against Dustin Poirier is rumored at the moment. However, a trilogy against Nate Diaz could also be considered for The Notorious One next.

X
Peacock conscripts WWE in ongoing battle for your soul…SportsVince McMahon’s empire is joining NBC’s Peacock platform.Photo: WWELast week, it was the announcement that NBC would be shutting down NBCSN by the end…
close