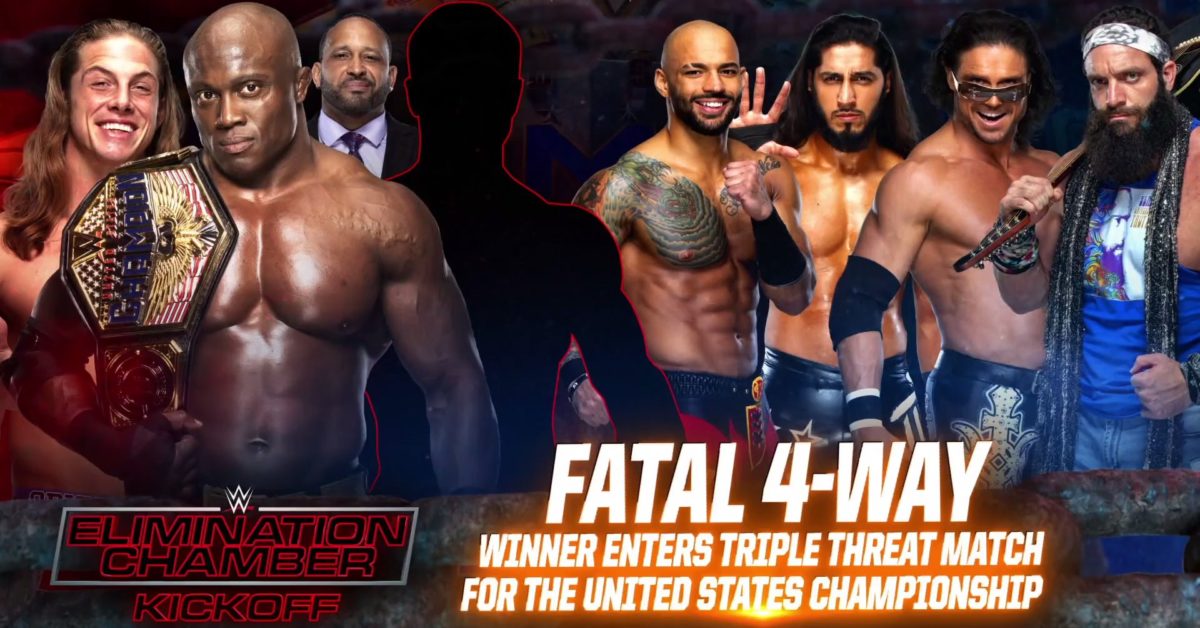 Hi, and welcome to Bleeding Cool’s live coverage of the WWE Elimination Chamber PPV. Though the PPV is happening literally right now, WWE is still sort of figuring things out. Keith Lee, for example, isn’t ready to compete and will need to be replaced, and his replacement will be decided with a fatal four-way match here on the Kickoff Show.

At least WWE has acknowledged by this point that Keith Lee needs replacing, and they’ve come up with a plan to replace him. When it comes to Lacey Evans, who is pregnant with Ric Flair’s love child and therefore cannot compete, WWE still hasn’t revealed anything about who will replace her to face Asuka for the Raw Women’s Championship.

The Elimination Chamber Kickoff show follows the usual format of panelists discussion the show, watching the promo videos for the show, and a single match, in this case, the aforementioned Fatal 4-Way.

Mustafa Ali vs. John Morrison vs. Ricochet vs. Elias

You just know these guys were originally set to compete in this pre-show match with no stakes, but now the winner gets to move up to the main card. How much jealousy do you think that introduced into this foursome?

They have a match, which is interrupted constantly by interference from Retribution, who are all at ringside except for Reckoning, who is of course not here for the same reason Keith Lee isn’t. John Morrison steals the pin in this one, rolling up Mustafa Ali as he’s enjoying Retribution wrecking Ricochet outside the ring.

With that settled, it’s time for ol’ Jude Terror to get ready for recapping the main show. Chelsy Bloomfield will be picking this up for the next match.

And now, some SEO keyword-rich copypasta about the Elimination Chamber PPV:

Asuka was also set to defend her Raw Woman’s Championship against Lacey Evans, but now that Evans is pregnant with Ric Flair’s baby, she needs a replacement, though WWE has given no indication who will replace her. The match remained listed on the Elimination Chamber website until the day of the show and then was removed completely. Another match that suffered from last-minute changes is the triple threat for the United States Championship, with Bobby Lashley defending against Riddle and Keith Lee originally. But Lee, who hasn’t been on WWE television in weeks since his fiance, Mia Yim, revealed she has COVID, was not medically cleared to compete and had to be replaced by the winner of a Fatal 4-Way on the Kickoff show.