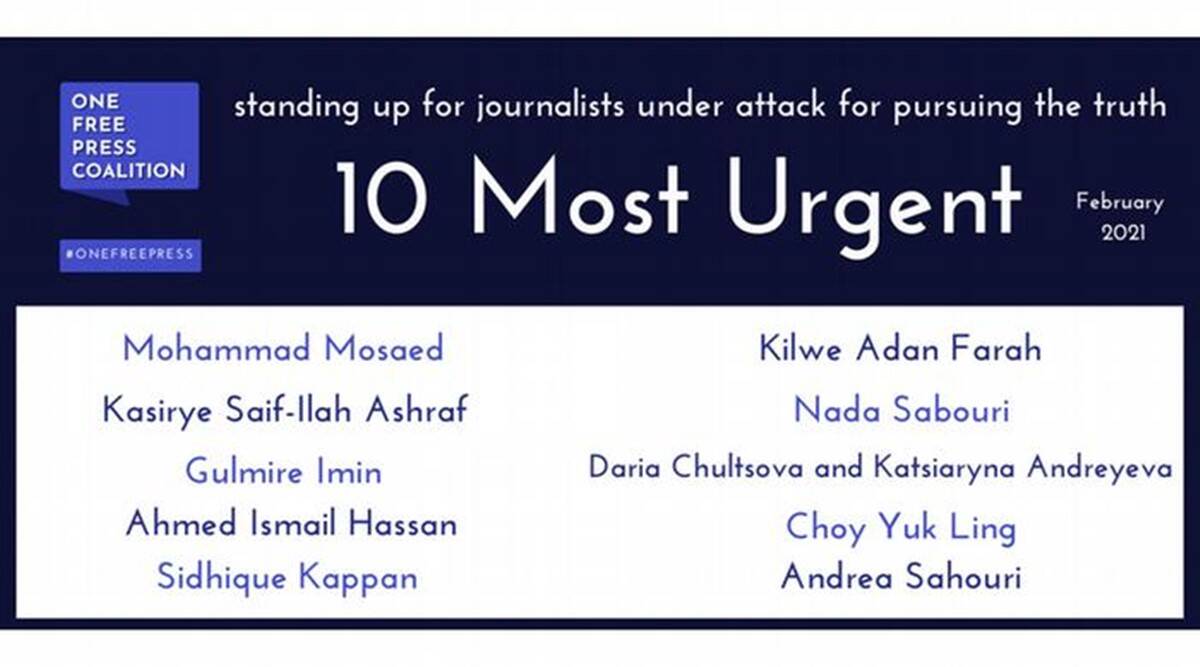 In January, freelance economic journalist Mohamed Mosaed was detained by Turkish border police. He had fled Iran following a summons to begin serving his jail sentence in two days’ time. The sentence amounts to nearly five years in prison, a two-year ban on journalism activities, and a two-year ban on using all communications devices. Mosaed had been arrested in 2019 for posting on Twitter during an internet shutdown that authorities had implemented in response to anti-government protests. He was released, then arrested again in 2020 after he criticized the government’s lack of preparedness for responding to Covid-19 and parliamentary elections. His charges include “colluding against national security” and “spreading propaganda against the system.” Turkish officials have assured his lawyer that he will not face deportation.

Security officers assaulted at least ten journalists covering opposition events leading up to the country’s presidential election in mid-January. Weeks after Kasirye Saif-Ilah Ashraf was hospitalized due to police holding his mouth open and pepper spraying him, police fired a projectile that hit the Ghetto Media reporter in the head and cracked his skull. Kasiyre remains hospitalized. Greater Masaka Regional Police Commander Enoch Abaine, accused of firing the projectile at Kasirye and at least one other journalist, claimed that no journalist had been intentionally targeted during the incident. He said that authorities are investigating allegations that journalists had been injured at the event.

Uighur journalist Gulmire Imin has spent more than ten years behind bars, serving a life sentence on charges of separatism, leaking state secrets, and organizing an illegal demonstration. She was one of several administrators of Uighur-language web forums who were arrested after the July 2009 riots in Urumqi, in the Xinjiang Uighur Autonomous Region. Authorities accused Imin of being an organizer of demonstrations and of using the Uighur-language website to distribute information about the event. Imin was also accused of leaking state secrets by phone to her husband, who lives in Norway. China is the leading jailer of journalists, with 47 behind bars in 2020.

March marks nine years since Ahmed Ismail Hassan, a Bahraini videographer, was shot after filming a pro-reform protest. Riot police dispersed the crowd with tear gas and rubber bullets, then unknown assailants in a vehicle began firing live ammunition at the protesters. Hassan, 22, was shot and died at the hospital. His death was the third media fatality in Bahrain since the start of the uprising. The other two individuals died while in custody in 2011. Questions remain in all three cases.

Since October 5, Indian journalist Sidhique Kappan has been held in pretrial detention without any formal charges filed against him. Police at a toll plaza in Uttar Pradesh arrested him and three political activists with whom he was traveling from New Delhi to cover a gang-rape case that had sparked nationwide protests. A freelance reporter who has covered politics, crime and current affairs for Malayalam-language news outlets, Kappan is being held on allegations including incitement and terrorism. There are also concerns about Kappan’s health amid the Covid-19 pandemic, with colleagues and family saying that the jail has not implemented sufficient safety measures against the virus.

After two weeks detained at an undisclosed location in the semi-autonomous state of Puntland in the semi-autonomous state of Puntland, Kilwe Adan Farah was moved to Garowe Central Prison in January and allowed communication with his family. He runs the Facebook-based news outlet Kilwe Media Inc. and had recently covered a protest in Garowe, the capital of Puntland, and interviewed members of the public about economic policies. A military court has accused Kilwe of murder and attempted murder, which could carry a death sentence. However, the Media Association of Puntland questions the legality of the military court handling a civilian’s case and believes the allegations were fabricated.

In August, freelance sports reporter Nada Sabouri began a 3.5-year jail term at Tehran’s Evin prison, five years after she was originally sentenced. She had been arrested in 2014 as a reporter for the economic daily Kasbokar covering a rally on behalf of political prisoners at the presidential office. She was subsequently charged with “colluding against national security” and “disturbing public order” and released on bail. In 2020, Iran imprisoned 15 journalists.

For the first time since 2014, CPJ documented Belarus jailing journalists last year, at least ten in the months of protests following presidential elections. Among them were Belsat TV reporters Daria Chultsova and Katsiaryna Andreyeva. The two were arrested without explanation when law enforcement officers broke down a door in the middle of a live video broadcast in November. A court charged the two women with “organizing and preparing of actions that grossly violate public order,” both facing up to three years in prison. Early during pretrial detention, Andreyeva fainted and hit her head on the floor but was denied a doctor-prescribed consultation with a neurologist and was banned from sitting or lying down while crammed among eleven people in a cell intended for four.

CPJ has documented the broad decline of press freedom in Hong Kong in recent years. In November, police searched the home of documentary producer Choy Yuk Ling and arrested her. She was charged with giving false statements to obtain license plate information—part of researching cars involved in a mob attack on subway riders. Choy was one of the producers of an investigation that aired in 2020 about the violent incident that took place on July 21, 2019 at the Yuen Long metro station. If convicted, Choy could face a fine of $645 and up to six months in jail. Her next trial date is March 24.

In the U.S. in 2020, an unprecedented 110 journalists were arrested or criminally charged. At least 12 still faced charges at the end of 2020. Des Moines Register reporter Andrea Sahouri is due in court on February 8, charged with failure to disperse and interference with official acts, which are punishable by hundreds of dollars in fines or prison time in lieu of a fine. Sahouri was reporting on protests in May 2020 when she was pepper-sprayed and arrested.