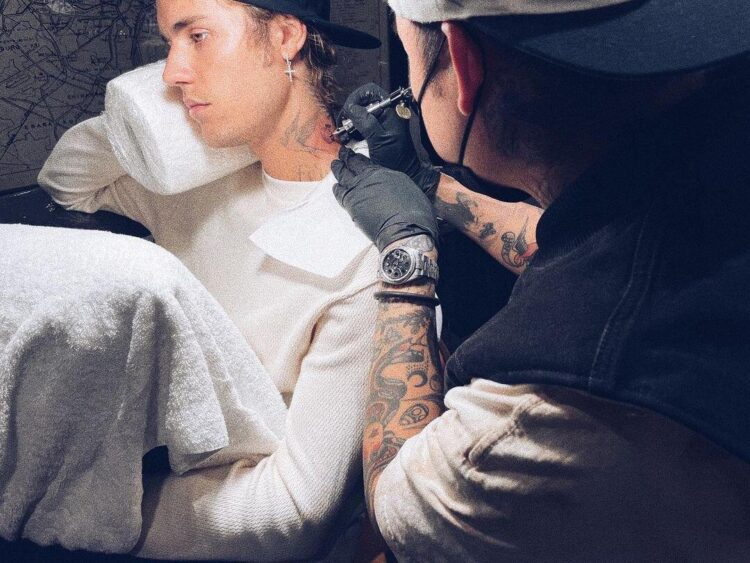 Justin Bieber’s mom is weighing in on his latest tattoo.

Over the weekend, the 27-year-old singer shared a pair of photos of himself getting a peach tattoo on his neck — likely a reference to his hit single “Peaches” off his latest album, Justice.

Captioning the snaps with a peach emoji, Bieber gave celebrity tattoo artist Doctor Woo a shout-out for the inking.

Although many of his pals were quick to congratulate him on the latest addition to his extensive collection of tattoos, mom Pattie Mallette playfully suggested that perhaps her son had reached his limit.

“Don’t you have enough yet?” she commented alongside a weary face emoji.

Shortly before getting inked, Bieber mentioned that he was thinking of getting a tattoo in honor of his latest single, featuring guest vocals from GIVEŌN and Daniel Caesar.

“Maybe I’ll get like a small peach on my body somewhere,” he said this week during an interview with Sirius XM’s The Morning Mash Up.

RELATED: Justin Bieber Gives Fans an Up-Close Look at All of His Tattoos

During a 2020 YouTube special, Bieber shared that he was likely finished getting tattoos on his neck. “I think I’m done on my neck. That’s a Hailey request,” he said.

“My back is still pretty open, and I don’t have kids yet. So, I’m thinking of getting their portraits on my back,” he added.

As for her own history with tattoos, Baldwin recently revealed that there is one she regrets getting.

While gracing the cover of Elle‘s April issue, the model, 24, candidly said that out of all her “20-something” tattoos, a small handgun that is on the inside of her middle finger on her left hand is one she “would never” get today.

Baldwin, who has been an outspoken supporter of gun control in recent years, first got the tattoo back in 2015 .”Tbh I don’t know why I have this tattoo…just another story to tell lol. It is what it is,” she wrote on Instagram at the time alongside an image of the ink.