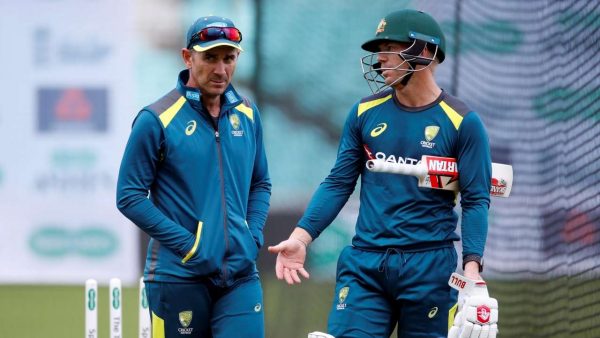 As per reports in Sydney Morning Herald some Australian players are not happy with the coaching style of Justin Langer, who is the current coach of the side. A few other Australian media outlets are echoing the sentiments of the Herald as well. Meanwhile, this was Justin Langer and skipper Tim Paine’s second back to back Test series defeat against India in theior own backyard. The result has raised a few eyebrows on whether the pair need to continue any longer.

The report said that some players are unhappy with the sudden mood swings of Justin Langer and his intensity as coach.

“Dressing-room sources say that over a gruelling summer, Langer’s management style wore thin with some players, who on top of having to live in a bubble for months on end say they have become drained by his intensity and mood swings,” the SMH reported.

Some senior players are frustrated at the atmosphere in the team being brought down by the coach’s shifting emotions and what they see as too much micro-management. They say that has extended to bowlers being bombarded with statistics and instructions about where to bowl at lunch breaks including during the fourth and final Test against India at the Gabba the report further read.

Meanwhile, Langer has rubbished any such claims saying that his relationship with the players have not been affected due to their series loss against India. He further said that he neither talks about statistics and neither he goes for bowlers meetings.

“It’s actually the opposite of what happens. I never talk about statistics to the bowlers, ever. I don’t go to any of the bowlers’ meetings. That’s what the bowlers’ coach is meant to be doing,” he said.

Justin Langer still has 18 months of his contract left, however, the players think that assistant coach Andrew McDonald is more ‘approachable’.

“Players believe Langer means well and respect his legacy in the sport but some have turned more and more to assistant coach Andrew McDonald for support because they increasingly don’t know where they stand with the boss,” it said.

Back to Top
Close Add post
X
Sam Curran Who’s Rested For First 2 Tests, Is Hopeful To Contribute To The Team…CricketSam Curran, England’s all-rounder is rested as part of England’s rotation policy for the two Tests in but will be joining the side for the remainder o…

X
Joe Root Can Play Spin Well And Is Hard To Bowl Dot Balls At: Jos Buttler…CricketJos Buttler, England wicketkeeper-batsman on Saturday said that Joe Root is a very hard player to bowl dot balls against and the Test skipper can comb…
close