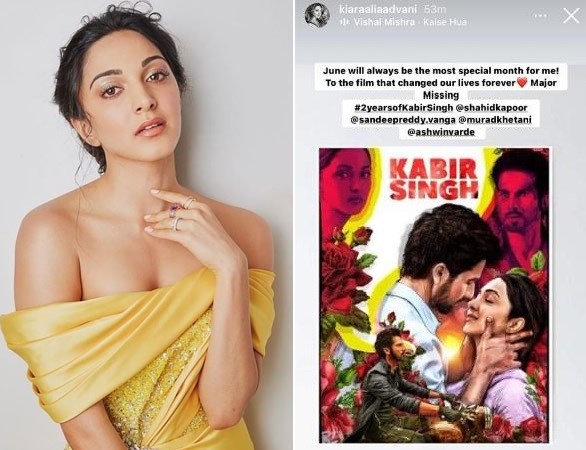 Helmed by Sandeep Reddy Vanga, the film which is a remake of the popular Telugu hit film ‘Arjun Reddy’ that starred Vijay Deverakonda and Shalini Pandey, went to become the biggest hit of 2019.

Kiara delivered her biggest blockbuster with Kabir Singh, turning into an overnight sensation, winning hearts all over. Diva took to her social media and wrote, “June will always be the most special month for me! To the film that changed our lives forever. Major Missing! #2YearsofKabirSingh”

Meanwhile, on the work front, Kiara is gearing up for the release of ‘Shershaah, Bhool Bhulaiyaa 2, Jug Jugg Jeeyo and Shashank Khaitan’s untitled next.

Shershaah pairs Kiara and Sidharth for the biopic action drama helmed by filmmaker Vishnuvardhan in his Hindi directorial debut and produced by Dharma Productions and Kaash Entertainment that traces the life of Param Vir Chakra awardee and army captain Vikram Batra.

The film stars Sidharth Malhotra in double role as Vikram and his identical twin brother Vishal.

Initially set to release theatrically worldwide on 3 July 2020, Shershaah was indefinitely delayed due to COVID-19 pandemic. It is now scheduled for global cinema release on 2 July 2021.