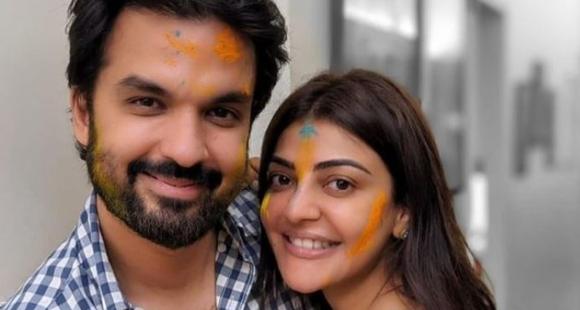 As the country is celebrating the festival of colours, celebrities are sharing photos with their significant others. Sharing the photos, they are sending their wishes to their fans and followers. Kajal Aggarwal, who got married last October to the Mumbai-based businessman Gautham Kitchlu. Taking to her Instagram space, Kajal shared photo with her husband where they both can be seen celebrating their first Holi as a married couple.

In the photo, they both can be seen with minimalistic colours in their faces while grinning ear to ear. Sharing it, Kajal wrote on her Instagram space, “May this Holi bring you and your family lots of love joy, positivity and good health. #stayhome #staysafe #happyholi”. From their casual coffee outings to lavish dinner dates, the couple have often shared their photos on social media to keep their followers updated with their whereabouts. Their wedding and honeymoon photos which they shared, went viral on social media.

On the work front, Kajal Aggarwal a lineup of films in her kitty. She is currently busy with the shooting of Chiranjeevi’s Acharya. She revealed the same in her recent social media post while sharing a glimpse of Chiranjeevi from the sets. Directed by Koratala Siva, the film also has Ram Charan in an extended cameo, while Pooja Hegde will reportedly pay his love interest. Kajal also has a Tamil film in her kitty namely Hey Sinamika, which also stars Aditi Rao Hydari and Dulquer Salmaan in the lead roles.