Kangana Ranaut back in Mumbai! 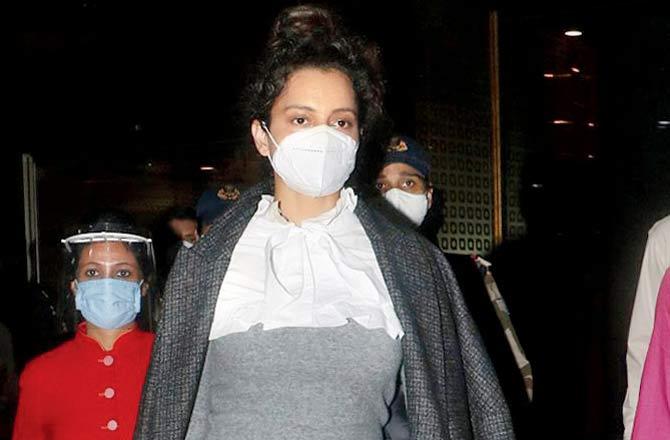 On Sunday night, Kangana Ranaut returned to Mumbai from hometown Manali. The actor is slated to begin shooting for Razneesh Ghai’s Dhaakad. She had been prepping for the action thriller in Manali. Earlier, Kangy was shooting for Thalaivi in Hyderabad and Chennai.

Thalaivi’ is written by ‘Baahubali’ and ‘Manikarnika’ writer KV Vijayendra Prasad and ‘The Dirty Picture’ and ‘Once Upon a Time in Mumbai’ writer Rajat Arora. The release date of the film has not yet been decided after it was postponed due to the coronavirus pandemic.

Thalaivi is an upcoming bilingual biopic of late Jayalalithaa. The film will trace the journey of the late leader from silver screen to politics. It is directed by AL Vijay and also stars Arvind Swami, Prakash Raj, Madhoo and Bhagyashree.

In an interview with mid-day earlier, Kangana Ranaut shared, “Dhaakad is in the same space as Resident Evil. The movie has several chase sequences and sword fights. I will use all kinds of sophisticated weapons, including some of the latest machine guns. I believe one must pick up new skills for every movie. I don’t like to rush into any project as it makes me anxious.”

Dhaakad will be shot across various locations in India and abroad and will feature several high-octane action sequences. Sharing her experience as she shot for the teaser, Kangana Ranaut shared, “The guns that were used for the teaser were real and were very heavy. It took all my strength to lift one. My director Razy had a great time seeing me struggle with the machines having a good laugh. Hopefully, he will have me to use dummy guns for the shoot of the film.”

Also Read: Kangana Ranaut hits back at those criticizing her bikini photograph