Kangana Ranaut pens an emotional note as her grandfather passes away 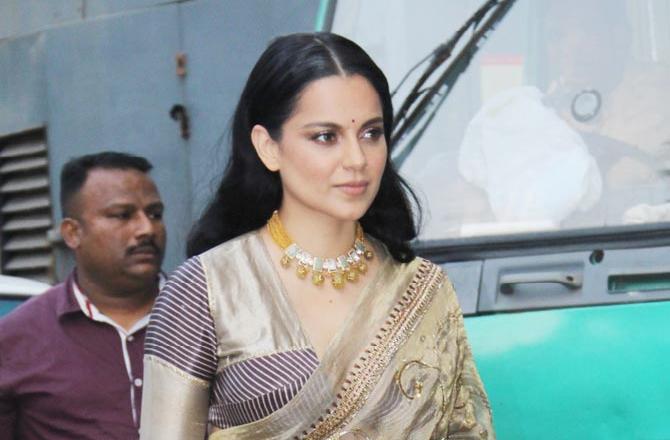 On the night of December 14, Bollywood actress Kangana Ranaut shared a black-and-white picture of her grandfather and penned an emotional note after his unfortunate demise.

Sharing a picture of his, this is what the actress had to write- “This evening I drove to my parents house as my grandfather Shri Braham Chand Ranaut wasn’t keeping well for past few months, just when I reached home he had already passed away. He was 90 years old still had an impeccable sense of humour and we all called him Daddy. OM Shanti.” [SIC]

This evening I drove to my parents house as my grandfather Shri Braham Chand Ranaut wasn’t keeping well for past few months, just when I reached home he had already passed away.
He was 90 years old still had an impeccable sense of humour and we all called him Daddy. OM Shanti ð pic.twitter.com/rbD14T6CCD

The actress recently met Defence Minister Rajnath Singh to seek his blessings for her upcoming movie ‘Tejas’. A day after announcing the wrap of her much-anticipated flick ‘Thalaivi’, Ranaut is all set to shoot for her next awaiting project.

She also shared a picture with the tweet wherein she is seen presenting flowers to the Defence Minister along with her team members including sister Rangoli Chandel.

Ranaut would be portraying the role of an IAF pilot in her next project — ‘Tejas’. The IAF was the first of the armed forces in the country to induct women in combat roles in 2016. The film takes inspiration from this landmark event.

The first look of the film was released earlier in February which featured the ‘Tanu Weds Manu’ actor donning the IAF uniform. Helmed by Sarvesh Mewara and bankrolled by Ronnie Screwvala, the film is scheduled to release in April 2021.

Also, in October, Kangana Ranaut returned to the set of Thalaivi, which she described as the “most soothing and comforting place”. The actor, who will essay the role of former Tamil Nadu Chief Minister J Jayalalithaa in the biopic, ended her seven-month break as she shot crucial indoor scenes at the Ramakrishna Cine Studios in Hyderabad.

“Kangana has also filmed an elaborate song at the studio. Even though AL Vijay [director] is working with only 30 per cent of the unit strength in compliance with the shooting guidelines, the actor-director duo is single-mindedly working towards completing the schedule by October 10,” revealed a source.

For the final stint that is slated to roll in mid-November in Hyderabad, the makers will have a tough task on their hands. On the cards is the shoot of the climax that sees Ranaut’s Jayalalithaa step out of the legislative assembly as a crowd awaits her. “The makers wished to film the sequence on a large scale with about 350 people. Since the guidelines suggested that only 33 per cent of the original crew strength can be present on a set, the director had held off the filming of this sequence until it was safe to shoot with a crowd. But now, with the biopic almost complete, the team is currently trying to figure out a way to shoot the climax,” adds the source.