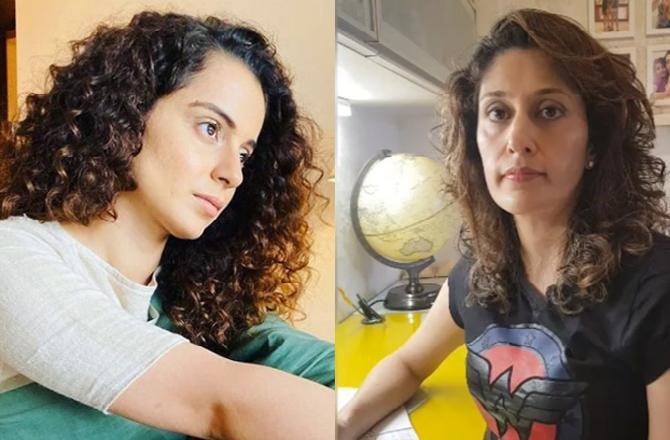 Bollywood actress Kangana Ranaut on Sunday extended support to Kamalrukh Khan, wife of late music composer Wajid Khan, who has opened up about her alleged ordeal within her inter-caste marriage, claiming scare tactics by her in-laws to force her into conversion included taking her to court seeking divorce.

Kamalrukh has revealed in an Instagram post how, till now after Wajid’s death, her in-laws allegedly continue to harass her due to her resistance to convert to Islam, which also destroyed her relationship with her husband when he was alive. Have a look at her post right here:

Kangana tweeted from her verified account on Sunday, reacting to Kamalrukh’s claim.

The actress wrote: “Parsis are the genuine minority in this nation, they did not come as invaders they came as seekers and gently requested for mother India’s love. Their small population have hugely contributed to the beauty- growth and economy of this nation.” [SIC]

Taking sides with the late music composer’s wife, Kangana posed a question to Prime Minister Narendra Modi regarding how our nation is protecting minority communities like the Parsis, which do not seek sympathy by creating tension and which are decreasing in numbers.

The actress wrote: “She is my friend’s widow a Parsi woman who is being harassed by her family for conversion. I want to ask @PMOIndia minority that don’t do sympathy seeking drama, beheadings, riots and conversions, how are we protecting them? Parsis shockingly decreasing numbers.” [SIC]

Music composer Wajid Khan passed away on June 1 this year. Almost six months after his death, his wife Kamalrukh has taken to social media to open up about her bitter experience with her inter-caste marriage and alleged that the “scare tactics” used by Wajid’s family to force her into conversion included taking her to the court seeking divorce.

Kamalrukh further wrote that, even after Wajid’s untimely death, the “harassment from his family continues”.

“I stand fighting for the rights and inheritance of my children which have been usurped by them. All this because of their hatred against me for not converting to Islam. Such a deep rooted hatred that even the death of a loved one could not move. I truly wish this anti-conversion law is nationalised, reducing the struggle for women like me who are fighting the toxicity of religion in inter caste marriages,” Kamalrukh wrote in her unverified Instagram account post.