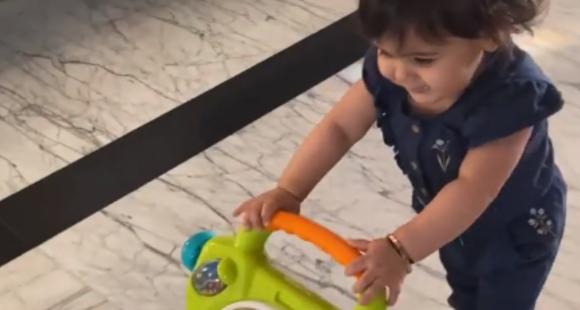 Kapil Sharma, who recently confirmed becoming a father for the second time, has shared a playful video of his baby girl Anayra and it has sent the internet into a meltdown. Check it out below.

Ace comedian Kapil Sharma and his wife Ginni Chatrath are all set to embrace parenthood for the second time. The popular host confirmed the same during #Askkapil session with his fans. It so happened that one of his fans asked him the reason behind his show The Kapil Sharma Show going off-air and replying to his query, Kapil stated that he “needs to be at home as his wife is to welcome their second baby.” To note, the popular comedian is also a proud father to baby girl Anayra Sharma. He often shares adorable pictures and videos of his little munchkin on social media.

The cuteness of Anayra often sends the internet into a meltdown. As we speak of this, Kapil has shared an adorable video of his baby girl wherein she is seen playing with a toy. The little toddler looked cute as a button and is seen smiling. Kapil’s little daughter can be seen clad in a blue dress with white flower rubber on her hair. Needless to say, it is the cutest thing that you will see on the internet today. In the video, one can also see a glimpse of Kapil’s lavish house as Anayra is dragging the toy.

Take a look at the video below:

Meanwhile, after wooing the audience in films and on television, Kapil is all set to take Netflix by storm as he is making his debut on the giant online streaming platform. While announcing the same early this month, he had shared a video of him rehearsing the lines and wrote, “This is the auspicious news. Don’t believe rumours guys, only believe me, I’m coming to @netflix_in . Soon!”