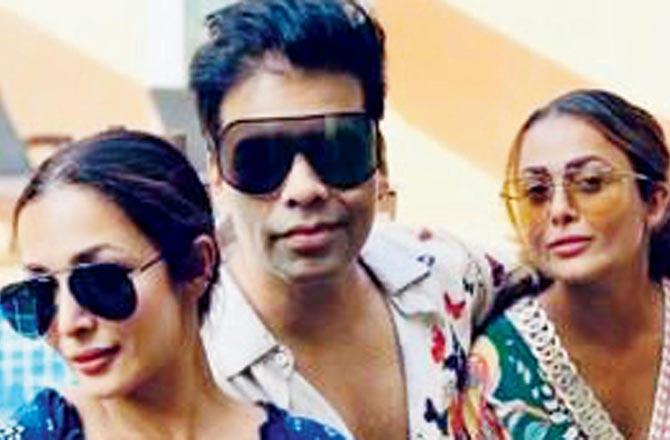 It’s the year-end and Karan Johar is in party mode. The filmmaker winged his way to Goa to make merry with buddies Malaika Arora and Amrita Arora Ladak. Malla shared a snapshot with KJo and wrote, “Eternal posers.” Amu and husband Shakeel Ladak own a sprawling holiday home, where Malla and beau Arjun Kapoor will be ringing in the New Year. KJo is slated to be part of the festivities. He will be keen to usher in 2021; 2020 will surely be a year he would like to forget for a host of reasons.

Malaika Arora, Amrita Ladak, Shakeel Ladak are accompanied by the kids, Arjun Kapoor and Arjun Kapoor. Sarvesh Shashi has also accompanied the gang. Malaika has been uploading some sizzling photos on social media, and we can’t get enough of it! The fitness diva oozes oomph in her monokini. Before heading to the beaches, Malaika Arora accompanied beau Arjun Kapoor to Dharamshala on the sets of his next drama. Bestie Kareena Kapoor Khan was also at the destination as she decided to spend quality time with hubby Saif, who was also shooting for the same film, Bhoot Police.

In a media interaction, Arjun Kapoor shared, “It’s actually refreshing to be outdoors and shooting for a film. It was really tough for our industry when the pandemic started and lockdown followed thereafter. I’m really happy that the industry has found its feet again and has started shooting with utmost care. It has taken a lot of preparations and stringent safety measures had to be applied for things to resume.”