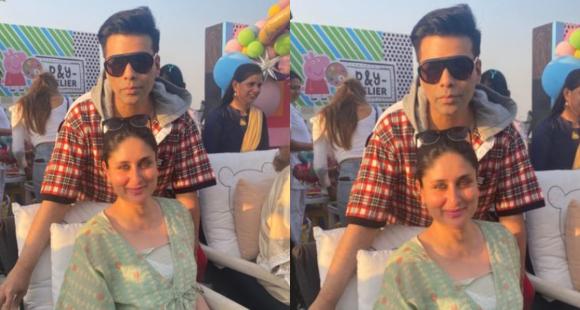 Kareena Kapoor Khan is all set to welcome her second child with Saif Ali Khan. Meanwhile, check out her latest picture with Karan Johar.

Kareena Kapoor Khan and Saif Ali Khan are all set to welcome their second child. Fans were elated when the husband-wife duo announced the good news last year. While we await the same, Bebo has been giving some major maternity goals and is often seen happily flaunting her baby bump and slaying her favourite kaftans at times. The actress has also made sure to meet her loved ones and friends in between to keep herself happy and occupied ahead of the baby’s birth.

For instance, the actress recently met her friend and filmmaker Karan Johar. The latter has shared a lovely picture of the duo on his Instagram handle. Once again, Bebo slays in a printed green kaftan as she sits on a chair with Karan by her side. One can see the pregnancy glow on her face pretty clearly! Meanwhile, the filmmaker adds a caption meant for her that reads, “Pop!!! And ready to pop!!!” Well, we guess there is some hint here about her due date drawing near!

For the unversed, today marks the birthdays of Karan Johar’s kids Yash and Roohi Johar. The filmmaker has also organized a party for the same. Earlier, Kareena Kapoor Khan sent her birthday wishes to the little munchkins on social media. She shared an unseen picture of Taimur Ali Khan with the duo and penned a sweet note for them. On the professional front, the actress will next be seen in the movie Laal Singh Chaddha co-starring Aamir Khan.