Home EntertainmentGossips Karanvir Bohra is jealous and guilty for not being with his wife, daughters; Says ‘Missing daddy duties’

Karanvir Bohra is jealous and guilty for not being with his wife, daughters; Says ‘Missing daddy duties’ 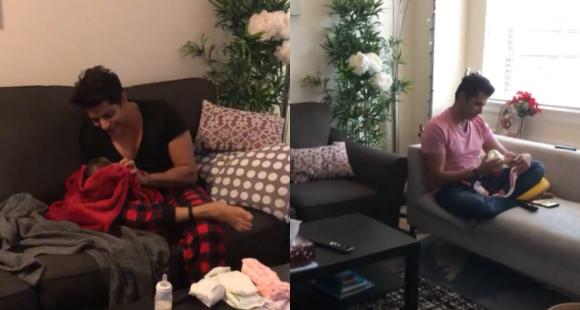 Karanvir Bohra is jealous and guilty for not being with his wife, daughters; Says ‘Missing daddy duties’

Karanvir Bohra and Teejay Sidhu, one of the cutest couples in the television industry, have recently welcomed their third daughter. The actor is a doting father and responsible husband when it comes to performing duties for his children. He has often shared videos and pictures of him taking care of his daughters. Karanvir is currently traveling because of work but he is missing his girls. As mentioned on his Instagram, the actor is missing his daughters and wife and wants to go back to them.

Taking it to his Instagram, Karanvir Bohra wrote, “I’m missing my #daddyduties Wanna go back. The joy I get in being a daddy on the job is so satisfying and fulfilling, I”m reliving the times I had with @twinbabydiaries I feel jealous and guilty at the same time that im not with @bombaysunshine right now to be with our lil one’s.” Teejay and Karanvir’s three daughters are in Canada and he is in Mumbai for work. The video shows Karanvir doing all his father’s duties happily. Right from feeding to making her sleep, the actor is happily seen doing it.

The other day, he had also shared a video asking his twin daughters Bella and Vienna to take care of their mother and little sister. The cute conversation left fans gushing. Karanvir Bohra and Teejay Sidhu got married in 2006 in Bangalore. Karanvir Bohra is a known face in the television industry. He has been part of many popular shows like Kasautii Zindagii Kay in which his role of Prem was highly appreciated.

Also Read: Karanvir Bohra pens a random heartfelt note for wife Teejay: I walked in love with you