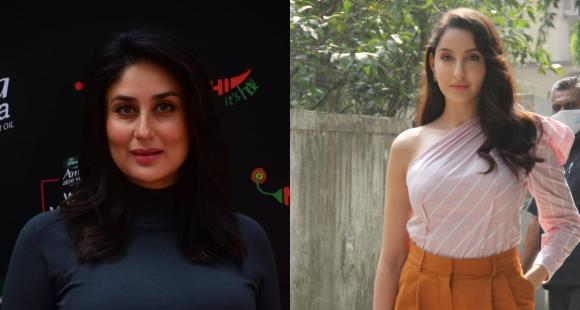 Nora Fatehi recently got candid with Kareena Kapoor Khan in the latter’s chat show. But there is one hilarious statement given by Nora that has now grabbed attention on social media. Nora Fatehi has carved a niche for herself in Bollywood within a short span of time. She has given phenomenal performances in songs like Dilbar from Satyameva Jayate and O’ Saki Saki from Batla House just to name a few. The dancer and actress recently got candid with Kareena Kapoor Khan in the latter’s chat show. Bebo begins by stating that both she and Saif Ali Khan are simply amazed by Nora’s dance moves and that she has a fan in her.

The Street Dancer 3D actress not only thanks Kareena for the kind words but also leaves the latter speechless with what she says next. Nora says that she will think of her engagement or marriage with Taimur Ali Khan when he gets older. An astounded Kareena Kapoor Khan then laughed it out and said that Tim Tim is just four years old and that there is a long way to go. Nora gives a hilarious reply stating she will wait for the same.

There is no denying the fact that Nora Fatehi rose to popularity in no time. Her last music video titled Naach Meri Rani crooned by Guru Randhawa garnered tremendous response from the audience. She will next be seen in Bhuj: The Pride of India that also features Ajay Devgn, Sanjay Dutt, and Sonakshi Sinha in the lead roles. As for Bebo, she will next be seen in Laal Singh Chaddha co-starring Aamir Khan. Moreover, she is all set to welcome her second baby this year.

Check out the full video below:

Also Read: Kareena Kapoor Khan and Taimur are “spoilt for choice’, thanks to sweet treats by Arjun Kapoor; See PHOTO