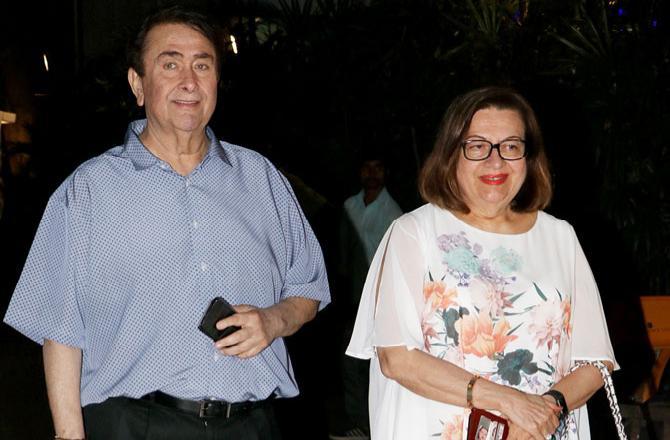 In 1971, veteran actor Randhir Kapoor married actress Babita in a grand wedding ceremony. However, the couple separated in 1988 due to personal reasons. The two reconciled in October 2007, having never divorced, but they lived separately for 19 years. Their two daughters Karisma and Kareena Kapoor lived with Babita during this period.

Recently, Kareena opened up on the bond her parents share with each other. She also opened up on what it was like to be raised by a single mother. Speaking to Barkha Dutt, Kareena said, “My mother is my best friend but I adore my father because I respect and love him a lot. He is not very in-your-face because he is someone who has always chosen to be at the back. He is not someone who is commanding the attention and wants that. He is silently always there for us and I know it.”

“My parents have a lovely relationship because sometimes, two people realise that their lives aren’t exactly going the way they planned, so it’s better that they don’t stay together but they can still be friends and sometimes, take decisions about the kids. It’s not necessary that they have to be staying under the same roof or being there 24*7 together. I think both Karisma and I understood that at a very early age, that this kind of relationship can exist as well. It has existed for almost 35 years with my parents and I see that in times when they need to come together, they are always together, but they prefer to have their day-to-day lives separately, which is wonderful,” she added.

Apart from her parents, Kareena shares a close bond with her elder sister Karisma Kapoor. The two are regularly captured dining out or vacationing together. In a recent interview, Kareena opened up on the relationship she shares with her elder sister. She said, “We are really close. We’re more like best friends rather than sisters. We share everything. There is complete transparency. I’m more of her elder sister like she says because I’m always firing her and advising her. But whenever she feels something, she is always my go-to person. My immediate thing would be that I would turn to her. She is the person that would come to my mind.”

Also Read: Kareena Kapoor Khan: When Has Anyone Ever Said That Pregnant Women Can’t Work?

Revealing the best advice her sister has given her, she said, “My sister has always been so supportive. She is somebody who believes in me 100 per cent. She’s somebody who doesn’t judge me for anything. She is somebody who loves me unconditionally. Somebody who’ll always tell me ‘be real, be your own person, follow whatever you think is right.’ My career path also and my personal life also, I think in many ways we’re chalk and cheese. Even if she doesn’t believe in something I do, she’ll always allow me and support me to do that. I think that is the biggest advice that she’s given.”

This isn’t the first time that Kareena has made her affection towards Karisma public. In a recent interview, Bebo had talked about working with her sister. She said, “We have always wanted to work together but till now we haven’t got that kind of script. We have not liked anything. Somebody should come with a good script then we will consider.”