Home EntertainmentBollywood Kareena Kapoor on her bond with Karisma: I’m more of her elder sister, always firing her and advising her

Kareena Kapoor on her bond with Karisma: I’m more of her elder sister, always firing her and advising her 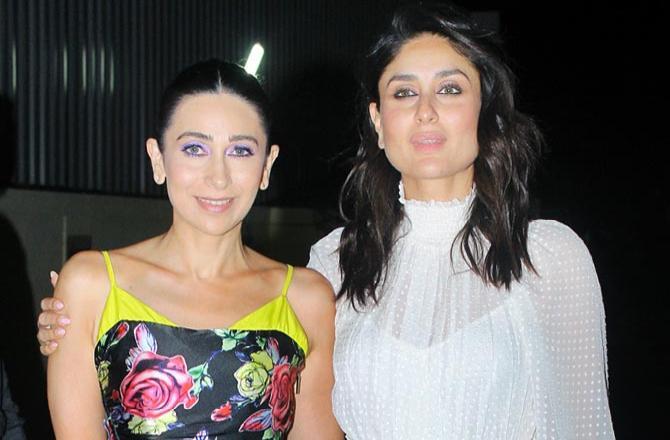 Kareena Kapoor Khan and Karisma Kapoor are not only sisters but also great friends. The two, who share a deep bond, are regularly captured dining out or vacationing together. In a recent interview, Kareena opened up on the relationship she shares with her elder sister-actress.

Kareena revealed that Karisma is more like her best friend and that they share everything with each other, calling Karisma a ‘go to person’ for advice. Speaking to Pinkvilla, she said, “I think it would be my sister. We are really close. We’re more like best friends rather than sisters. We share everything. There is complete transparency. I’m more of her elder sister like she says coz I’m always firing her and advising her. But, whenever she feels something, she is always my go to person. My immediate thing would be that I would turn to her. She is the person that would come to my mind.”

Revealing the best advice her sister has given her, she said, “My sister has always been so supportive. She is somebody who believes in me 100 percent. She’s somebody who doesn’t judge me for anything. She is somebody who loves me unconditionally. Somebody who’ll always tell me ‘be real, be your own person, follow whatever you think is right.’ My career path also and my personal life also, I think in many ways we’re chalk and cheese. But, she’s always supported. Even if she doesn’t believe in something I do, she’ll always allow me and support me to do that. I think that is the biggest advice that she’s given.”

This isn’t the first time Kareena has made her affection towards Karisma public. In a recent interview, Bebo had talked about working with her sister. She said, “We have always wanted to work together but till now we haven’t got that kind of script. We have not liked anything. Somebody should come with a good script then, we will consider.”

Also Read: Photo Inside: It’s Kareena Kapoor Khan And Her Cute Baby Bump On The Sets Of An Ad Campaign!

And there were reports that the sister-duo could be collaborating for Zubeidaa 2. A source had stated, “Khalid had written the script of Rutbaa (The Honour) keeping Karisma and Kareena in mind. The sequel will make Karisma appear only in flashbacks as the main character would be Kareena who would be investigating her mother’s mysterious death. But as he’s very busy writing the script for his next project – the sequel to New Delhi Times, Khalid hasn’t been getting much chance to make that movie, so he is converting the research material into a novel, called The Imperfect Prince.”

Some time back, we saw the two sisters shooting for a commercial. Karisma gave her fans a sneak-peek into behind the scenes from a shoot that the sisters are working on. Sharing the picture on her Instagram account, Karisma wrote- “Working with the sis always fun.” (sic) Have a look at the video right here:

She also gave a snippet on her Instagram stories, while getting ready for the commercial. Kareena also shared the same video on her Instagram handle. She wrote, “Double trouble. #SisterSquad (sic)”.

Karisma, on the other hand, has been a part of successful films like Raja Babu, Saajan Chale Sasural, Judwaa, Hero No. 1, Haseena Maan Jaayegi, Dulhan Hum Le Jayenge, Dil To Pagal Hai, Raja Hindustani, Jeet, and was last seen in the show, Mentalhood.

Also Read: See Post: Kareena Kapoor Khan Has Nothing But Love For Her Favourite Boys!