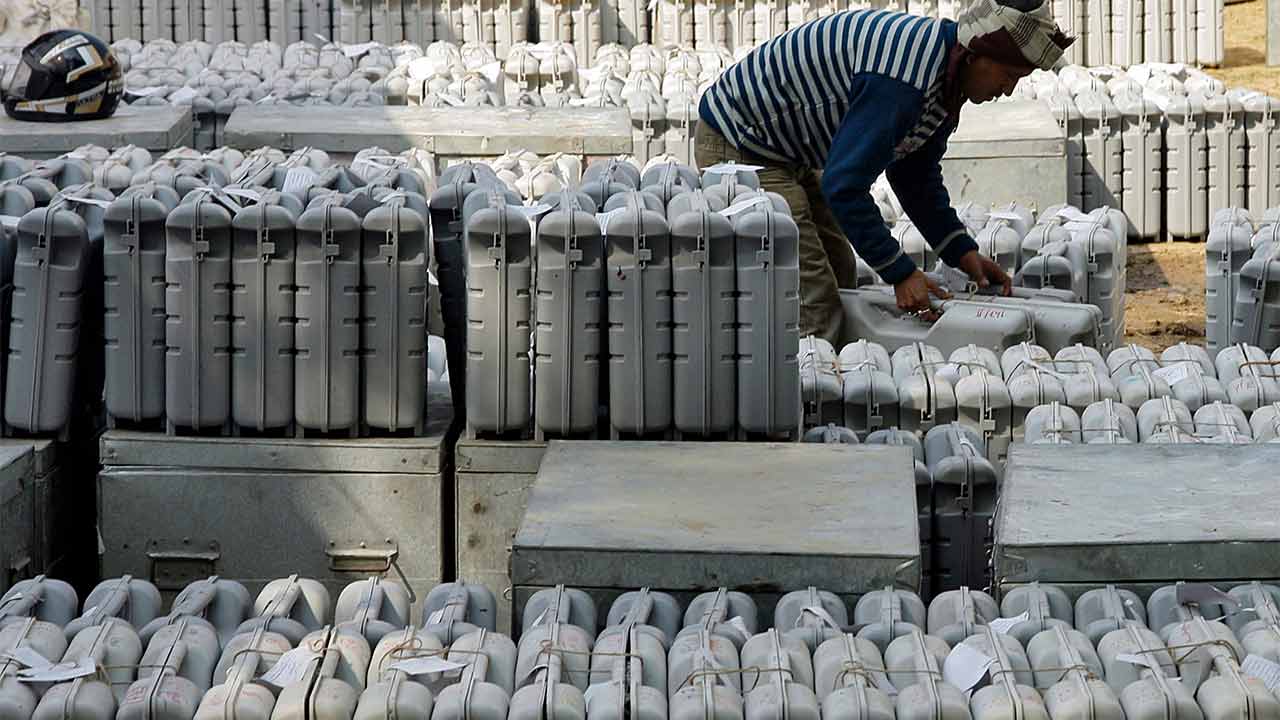 As per the latest trends in the Karnataka gram panchayat elections, BJP-backed candidates have won 29,478 seats, Congress-supported candidates 24,560, JD(S) 15, 825 and others 9,753, reports said EVMs being collected by a polling official. Image: Reuters

A day after both the ruling BJP and Opposition Congress claimed victory in the Karnataka gram panchayat elections, the BJP-backed candidates have reportedly managed an upper hand winning 29,478 seats as compared to Congress-supported candidates who won 24,560 seats.

The JD(S)-backed candidates won in 15, 825 seats while Independents and those supported by other parties won in 9,753 seats, several media reports said.

The Karnataka State Election Commission however has not made any official announcement.

Meanwhile, Chief Minister BS Yediyurappa on Thursday claimed 60 percent of candidates backed by the saffron party have won elections, according to the report in The Times of India.  BJP leader KS Eshwarappa, also speaking to the newspaper, claimed, “We’ve won more seats than Congress, JD(S) and Independents have collectively won.”

The Karnataka SEC Thursday chided political parties for claiming victories for candidates supported by them, saying results have been delayed due to voting being held via paper ballots, the report added.

Yediyurappa, earlier speaking at a press conference, stated that according to his information, of 5,728 gram panchayats, BJP-backed candidates have won a majority in around 3,800, PTI reported.

He further asserted that he would remain in the post for the remaining over two year period and complete the term, and there was no confusion regarding this within the ruling BJP.

Yediyurappa said he gave credit to collective leadership, all the while acknowledging efforts of district in-charge ministers, MLAs, and party workers.

But former Karnataka chief minister and Congress leader Siddaramaiah claimed that as per his information, Congress candidates have won the maximum number of seats. “We are number one, not BJP, as candidates supported by us have won at majority places I’m told. They (BJP) did not have candidates at many places…” he told PTI.

Siddaramaiah told Financial Express that as per reports, Congress-backed candidates are winning and that rural India is frustrated by the policies implemented by the BJP.

“Farmers are against anti-farmer laws and they found Gram Panchayat elections as the perfect opportunity to teach BJP a lesson,” he told the newspaper.

Responding to Yediyurappa’s assertion that he would complete his term as chief minister, Siddaramaiah said: “Yediyurappa is daydreaming, even if Assembly elections are held tomorrow, Congress will win, get a majority and come back to power.”

The elections were conducted to 82,616 seats in 5,728 village panchayats in two phases on 22 and 27 December using ballot papers with a voter turnout of 78.58 percent, and counting was taken up on Wednesday morning.

A total of 2,22,814 candidates contested the election, while 8,074 were elected unopposed. Though these polls are not held on party symbols, all political parties have put in efforts to ensure that the candidate supported by them wins, so as to have their hold on grass-root level politics.