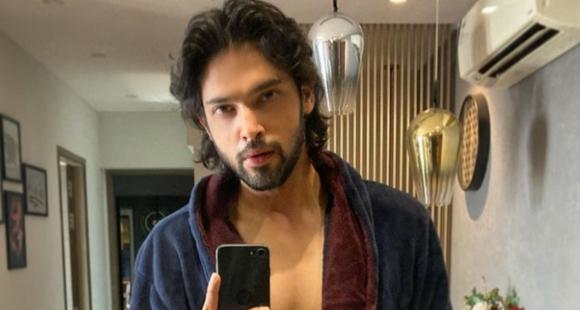 Rumours are rife that Parth Samthaan will be making his Bollywood debut with Resul Pookutty’s Piharwa. The actor is currently riding high on the success of his music video Pehle Pyaar Ka Pehla Gham.

Kasautii Zindagii Kay’s Parth Samthaan turns up the heat as he poses in bathrobe; Captions it ‘Weekend mood’

Kasautii Zindagii Kay fame Parth Samthaan is one of the most handsome actors in the television industry. The actor is an active social media user and always gives a glimpse of his private life to fans. Recently, his song Pehle Pyaar Ka Pehla Gham with Khushali Kumar released. The telly world hottie keeps fans hooked by sharing several stunning pictures and videos of him. And now once again he has turned up the heat as he shared pictures in a bathrobe and left fans in awe of him.

In the photos, he is seen wearing a blue coloured bathrobe and taking a mirror selfie. The actor is a handsome hunk and has captioned it as ‘Weekend mood’. From the picture, it looks like it is his home’s dining area and it simply looks stunning. Meanwhile, there are rumours going around that the actor might make his acting debut with Resul Pookutty”s Piharwa. However, there is no official confirmation about the same.

It has been a long time since the actor was seen onscreen in any television shows. He was last seen in Kasautii Zindagii Kay which went off air last year.

Fans loved Parth and Khushali pair in the song Pehle Pyaar Ka Pehla Gham. The song is an official remake of the film Papa Kehte Hai. In July 2020, Ekta Kapoor had announced her upcoming web series Main Hero Boll Raha Hu by dropping a video. In the video, Parth Samthaan was seen in a whole new avatar playing the role of a gangster in the series. The video had garnered an overwhelming response from fans.