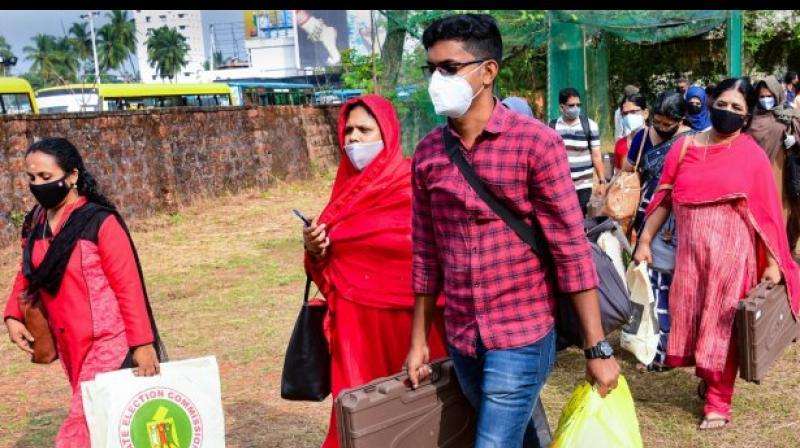 Thiruvananthapuram: Heavy polling was recorded in the third and final phase of local body polls in Kerala.

A total of 89,74,993 voters were eligible to vote in the third phase in 6867 wards across 354 local bodies. The polling was held strictly complying with COVID-19 safety protocol. Voters turned out in masks, maintained social distancing while waiting in the queues and used sanitizers before and after casting their votes. Barring minor incidents of scuffle between the supporters of rival parties, no major violence was reported from any of the northern districts.

The state had witnessed heavy turnout of voters in all three phases which clearly indicated the enthusiasm of the electorate. Leaders of LDF, UDF and BJP are keeping their fingers crossed over the heavy polling with each party trying to interpret the trend according to their respective calculations.

It may be recalled that 72. 67 percent polling was recorded  in the first phase on December 8 southern districts Thiruvananthapuram, Kollam, Pathanamthitta, Alappuzha and Idukki.

A higher voter turnout of 76.38 percent was witnessed in the second phase when central districts of Kottayam, Ernakulam, Thrissur, Palakkad and Wayanad went to polls on December 10.

Chief minister Mr Pinarayi Vijayan who cast his vote in Kannur on Monday morning, claimed that the ruling LDF would secure a historic win. However, the opposition parties including Congress and BJP dismissed his claims saying that people of Kerala had voted for a change this time.

The fate of the major fronts would be known on December 16 when counting takes place in the state. Considered as the semi finals before the Assembly elections next year, the stakes are high for all political parties in the local body polls.

Meanwhile, the chief minister refuted the opposition charge that he had violated the model code of conduct in announcing free COVID vaccine for people at a press conference.

Mr Vijayan said Kerala was the only state which is providing free treatment to the Covid patients. He accused the opposition of raking up baseless allegations.