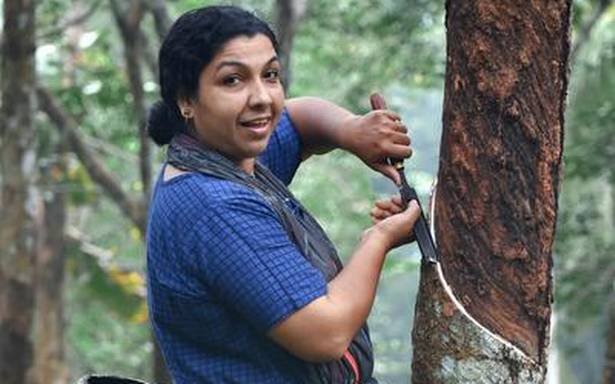 Her routine work, which earns the family’s daily bread, is not something that S.Sunitha would set aside even amid her hectic election campaigning. For the Left Democratic Front (LDF) candidate contesting in the Anad division of the Thiruvananthapuram district panchayat, the day begins at 5 a.m., when she heads to the nearby rubber plantation for tapping work.

She and her sister had learned rubber tapping when they were still in school, in an effort to support their mother. In 2011, she set up a restaurant too here under a programme of the Kudumbashree.

“Usually, I begin tapping early in the morning and my husband collects the latex later. Later, I would head to the Kudumbashree hotel. After the morning’s work at the restaurant, I would go to the Kudumbashree’s Panavoor CDS, of which I am the chairperson. By noon, I distribute food for the beneficiaries of the district panchayat’s Padheyam project. Now, my election campaign begins by 8 a.m. and so I am able to do rubber tapping only. I have found two persons to do the work at the hotel and for the food distribution,” she says.

The Padheyam project, which the district panchayat launched in 2017 to ensure a hunger-free district, is the one that she talks about the most. For two years, she had been distributing food to 35 destitute persons in her region every day. Owing to her association with the project, one of her priority areas is initiatives for senior citizens, who have no one to take care of them.

She plans to continue rubber tapping even if she wins, without compromising her responsibilities as a people’s representative.

RELATED:  TikTok cuts jobs in India, not clear if it can make a comeback after prolonged ban