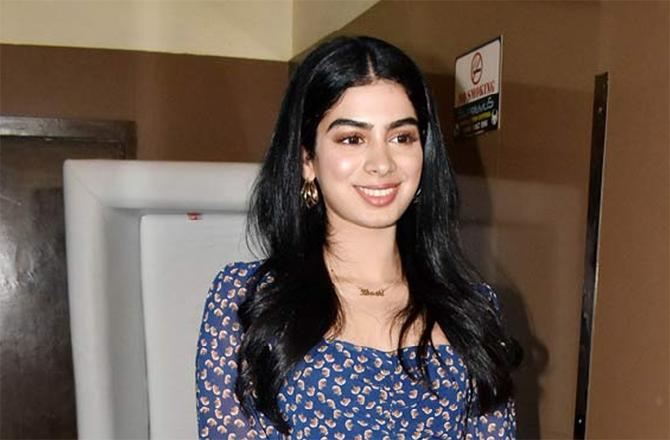 After Suhana Khan, the next name to make her Instagram account public is Sridevi and Boney Kapoor’s daughter Khushi Kapoor. Given Janhvi Kapoor has already stepped into the Hindi film industry and has been sharing her posts and pictures with fans, it seems Khushi too made her account public at the right time.

Her account is filled with some gorgeous pictures with friends, family, and solo and candid clicks. In a post earlier this month, she shared some pictures of herself and described the mood as grumpy. Have a look at the post right here:

And last month on the occasion of Diwali, she shared some stunning pictures with sister Janhvi and father Boney Kapoor. The trio indeed nailed their respective traditional attires. Here is the picture:

A few months back, a fan-club of Janhvi Kapoor and Khushi Kapoor took to its Instagram account to share a video where Khushi could be seen at the New York Film Academy, talking about wanting to be an actor, about wanting to work with her family. The video was shared a few weeks back but now has gone viral.

The video begins with a pulsating background music, and akin to the open credits of a Hindi film, the words say- Spotlight On Acting For Film Student Khushi Kapoor. She then proceeds to introduce herself and says, “Hi, I am Khushi Kapoor. My family is in the business but I have always just looked from afar.”

Also Read: Janhvi Kapoor On Her Bond With Khushi: I Am Immature And Childish, She Is Sensible And Independent

She adds, “I would definitely love to work with my family at some point in the future. I would like to prove myself and prove my place before I jump into working with my family. There’s really no other way to go about it than to immerse yourself into it.” The video shows Kapoor talking about the academy and the aspirations for acting juxtaposed with her mother Sridevi’s moments from her films and the New York Academy’s college campus.

She then states, “I learned about the New York Film Academy because my cousin attended here a few years ago and he would always say good things about it. I remember my mom filmed one of her films here (a still from English Vinglish plays) and that’s when I decided I wanted to be here.”

She also stated, “I really enjoy all of my classes over here but the ones that have stuck with me are acting for films and improv. I love acting for films because I feel like I am in a movie and actually working. It’s been an incredible experience for me.”