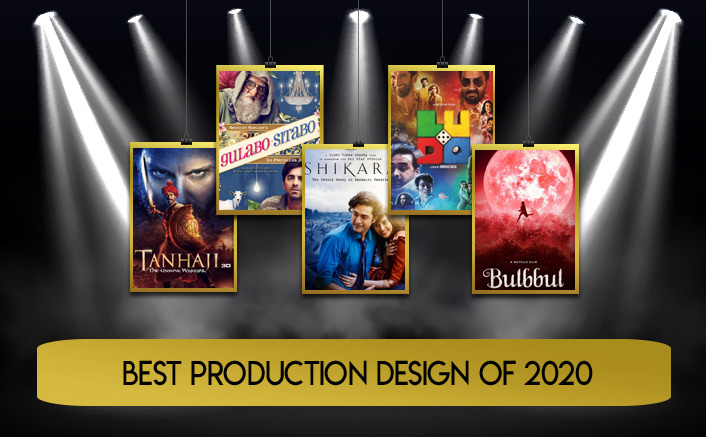 Indian cinema has evolved enough to give attention to detail to every aspect of filmmaking, creating a wholesome experience for the audience. While actors that suit the part, landscapes that forms the base for this world and the music that matches the story form a project, production design plays a significant role. In India especially, a diverse range of people and places make it more vibrant and it reflects in our Bollywood films.

This year like many other, we have seen a variety of films that were aesthetically beautiful, and a few touched the level of authenticity that is needed. Some like Housefull 4 and Tanhaji were big on production scale, a few like Gulabo Sitabo managed to let the chinks in the armour shine the most. Let’s see our nominations for the Best Production Design in Bollywood for 2020. Also, don’t forget to vote.

Om Raut managed to hit the core of the masala entertainment niche in a way that the film was a massive success. Starring Ajay Devgn, Saif Ali Khan, Kajol and Sharad Kelkar, the production design by Sriram Iyengar and Sujeet Sawant was reminiscent of the era the film was set in. Be it the battle sequence or the lavish ‘wadas’ everything was beautiful.

Vidhu Vinod Chopra’s Shikara dealt with a very sensitive subject. The film, that showcased the plight of the Kashmiri Pandits, was set in a particular time period and required everything to be a reflection of what had actually happened. Production designer Sonal Sawant did an amazing job here, especially with the refugee camps.

Taking away the USP, Amitabh Bachchan is known for and presenting a contradiction to his real personality was in itself a bold step. With Gulabo Sitabo, Shoojit Sircar took us to Lucknow and the numerous ruins that were once luxurious houses. Big B and Ayushmann Khurrana live in one such haveli. Mansi Dhruv Mehta with her design creates a character in the haveli. The set design is a metaphor to Mirza through whom one can imagine how this place might have looked in its glory days.

No one can match Anurag Basu’s eccentricity when it comes to creating worlds full of vibrancy and random things that are mismatch but still look beautiful. Anjan Gujarel and Kailash Sahu had a challenge of creating 4 worlds in one film and they do it with dedication. A lot of metaphors in Ludo are hidden in the set design and we are sure it must not have been a cakewalk to create this for the team.

Netflix’s Bulbbul, starring Tripti Dimri, deserves to be on every list this year. Directed and written by Anvita Dutt, the period drama is a folklore/feminist tale of what a woman is capable of doing if she decides to take things in her hand. The production design for this one is tricky. With the lights playing their magic, and a set so magnificent, it is difficult to put them in sync. Meenal Agarwal manages to bring the balance here.