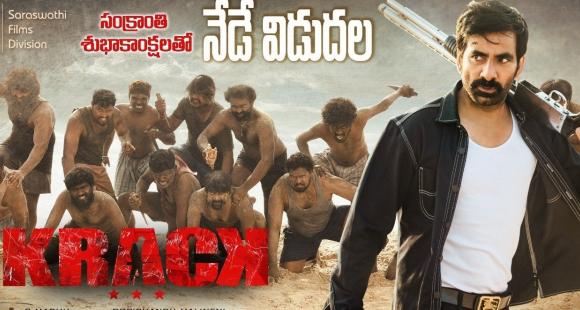 Taking to his Twitter space, the director Gopichandh Malineni announced that they have resolved all the issues and the film is getting released today. Ravi Teja and Shruti Haasan’s Krack was supposed to hit the big screens in Summer 2020. However, it did not happen owing to the pandemic situation. A couple of months back, when the lockdown was extended, it was anticipated that the makers were eyeing to release the film digitally. However, it came as a surprise when the makers announced recently that it will be released on January 9, a few das before Sankranti.

However, since morning, moviegoers kept on getting disappointed as shows after shows were cancelled in theatres. Apparently, the film’s release was put on hold as the makers had some unresolved issues with the film’s financers and the release did not happen this morning. Now, it has been revealed by the director that they have resolved all the issues and the film is all set to be released this evening.

All problems solved for #Krack release.
Let’s get Krackified from today’s first shows.
Watch it now in your nearest theaters!! pic.twitter.com/50y8HzFLqR

Revealing the news, he shared a poster of the film and wrote, “All problems solved for #Krack release. Let’s get Krackified from today’s first shows. Watch it now in your nearest theaters!!” Directed by Gopichand Malineni, Krack stars Ravi Teja as a cop who plays by his own rules, and Shruti Haasan plays the female lead. Varalaxmi Sarathkumar and Samuthirakani will be seen playing key roles in the cop drama. Krack is clashing the box office with Ram Pothineni’s Red which is set to be released on January 14.