KTR seeks 20% of funds from Centre for municipal projects 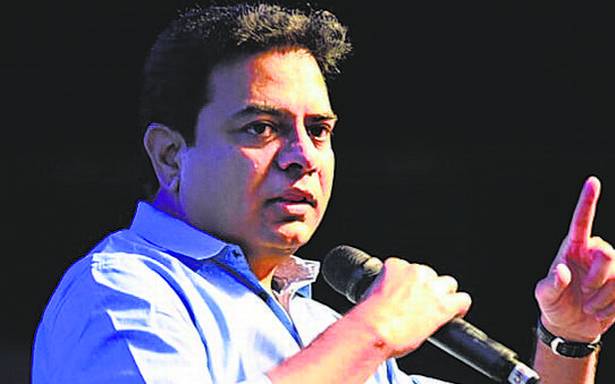 Municipal Administration Minister K.T. Rama Rao has sought ₹750 crore in the Union Budget of 2021-22 for the Comprehensive Sewerage Master Plan (CSMP) of the Telangana government to develop sewer network infrastructure in Hyderabad and other cities of Telangana.

In separate letters to Union Minister for Housing and Urban Affairs Hardip Singh Puri and Union Minister for Finance Nirmala Sitharaman, he requested 20% of the funds in the budget for Strategic Nala Development Plan (SNDP) to develop sewer network infrastructure for liquid waste collection in Hyderabad Urban Agglomeration (HUA) area, Metro Net Project in Warangal, and solid waste management in ULBs in the State.

The Minister said that in compliance with the National Green Tribunal (NGT) directions to mitigate the sewage pollution in Musi river stretches and water bodies in HUA, the sewage line network of 2,232 km is proposed at a total cost of ₹3,722 crore and the government would take up to 36 months for finishing the works. He requested for a sanction of 20% of the project.

Mentioning the recent floods in Hyderabad and its after effects, he said as a permanent solution to the issue the government has set up Strategic Nala Development Plan (SNDP) at a cost of ₹ 1,200 crore and sought ₹240 crore funds for the project.

Similarly, Metro Neo Project in Warangal, similar to that of Metro Neo Project in Nashik, has been designed to meet the growing population of an estimated 35 lakhs by 2051. The project covering 15.5 km length will cost ₹1,050 crore, he said, and requested for a sanction of ₹ 210 crore from the Union government.