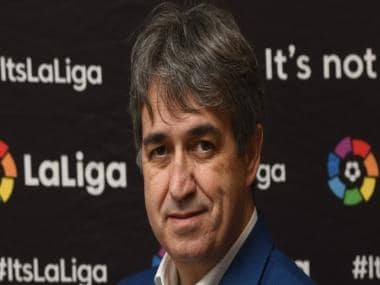 New Delhi: FC Barcelona closed the previous LaLiga season with losses of 97 million euros. Their biggest rivals, Real Madrid, ended 2019-20 with a shortfall of 106 million euros. Atletico Madrid, the third in the Big Three triumvirate in the Spanish league, have reported a year-on-year drop of 325 million euros, their debt having reached 999 million euros. These are eye-popping numbers, but in a season marred by coronavirus , they appear par for the course.

The year 2020, to put it mildly, was a forgettable year for all sports. Have you counted your losses yet?

I agree that past year was not great for any sport. Football action did resume last year, but no in-stadia fans meant a massive loss of match-day revenue. For larger clubs, the losses have been even more because there have been no stadium tours, museum visits and other such activities. The larger clubs have lost 3-5 percent over and above the usual match-day revenue loss. I read in certain reports that Real Madrid lost 5-6 million euros every match day. The situation with giants like Manchester United and Juventus is not much different either.

The only silver lining was that we managed to complete the season. At one point, we were not sure whether there will be any football at all, but we pulled through and started the next season too.

LaLiga has a strong finance security control system and almost every club in the league was asked to cut costs. There were salary cuts to the tune of 30-40 percent.

The biggest learning was to keep the alternate revenue streams flowing. So, despite the loss of match-day earnings, we retained 100 percent broadcast revenue and sponsorships.

If you look at the financial condition of LaLiga clubs 7-10 years ago, most clubs were in dire straits due to overspending. Thanks to our economic control, gradually things improved, and we can take heart from the fact that most clubs were in a healthy financial condition when the pandemic hit. My only advice to clubs is, spend what you have. Don’t go beyond what you have and plan well to cover the losses.

Spain has begun rolling out the COVID-19 vaccine, but the threat of the new strain of coronavirus is still looming large. In such a scenario, has any decision been made on fans returning to stadiums?

Allowing fans back in the stadiums is a big call. We would like to have fans back in the stadiums soon, but it cannot be a unilateral decision; the Spanish health and sports authorities have to be on board too. I think the plausible solution would be to get a few thousand fans in. Again, it all depends on vaccine development and distribution. As of now, it is very difficult, if not impossible, to know how many fans will be allowed and around what time.

LaLiga’s broadcast deal with Facebook for the Indian sub-continent expires at the end of this season. What’s in store?

Well, we (LaLiga and Facebook) have to start talking. We are talking to the market and you’ll get news fairly soon. I am not in a position to comment right away, but the Indian broadcast market is set for a drastic change with all these OTT players coming in.

Most broadcasters, such as Sony and Star, have their digital streaming platforms, and new players are entering the market regularly. So, broadcasting is entering a new digitally-integrated world, and we are aware of that. The success of IPL on Hotstar is a great indicator of how the Indian market is evolving.

Lastly, we know that Lionel Messi’s contract with FC Barcelona ends this year. It may still be early to say, but there is enough history to suggest that he may be on his way out. How is that going to affect LaLiga, considering all the losses that big clubs have endured past season?

Messi’s departure will be huge, no doubt. But, let’s remember that football is a team sport. Messi’s contract ends this year, and I don’t know whether he’ll stay or move on. All things considered, let’s not forget that by the time his contract ends, Messi will be 34 and nearing the end of his career.

As I say, players come and go, but clubs remain. A big league depends on three key factors – big players, big clubs, and great competition. When Cristiano Ronaldo left LaLiga, our broadcast audience worldwide and our social media following kept growing. So you see, the impact was maybe only in terms of image, not in following. Will Messi’s exit have an impact on LaLiga? Maybe yes, but we have been signing new contracts since last year, some of which extend to five years, and none of those contracts say that the day Messi is gone, we are out. I can say the same for our sponsors too. I am not implying that Messi’s departure will have no impact on LaLiga; of course it will affect us, but the league will keep growing.