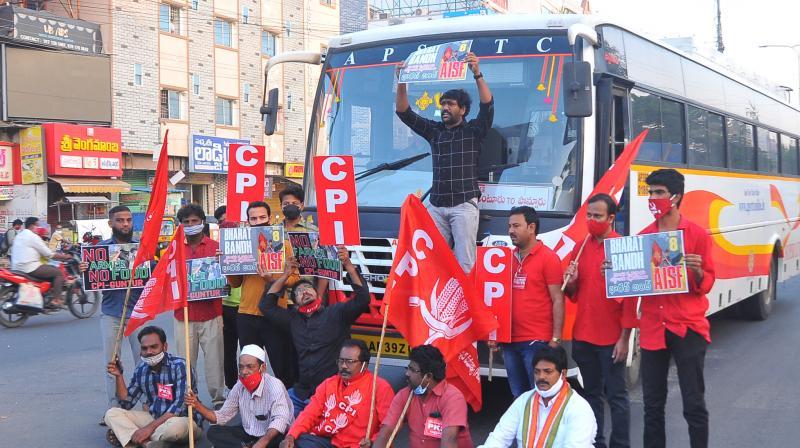 NEW DELHI: Life was disrupted in several parts of the country on Tuesday as shops and commercial establishments stayed closed, transport was affected and protesters squatted on key roads and rail tracks in response to a nationwide bandh called by farmers’ unions in protest against the Centre’s three farm laws. The farmers, mainly from Punjab, Haryana and Uttar Pradesh, blocked key roads during their four-hour “chakka jam” protest from 11 am. Protesters  also blocked railway tracks at several places in West Bengal, Bihar and Odisha.

Emergency services and banks, however, functioned as usual during the pan-India shutdown, backed by about 15 Opposition parties and several trade unions. The major impact of the protests, which were peaceful, was felt not only in Punjab, Haryana and Delhi, but also in Odisha, Maharashtra, Bihar and Jharkhand. In Rajasthan, where “mandis” were closed but shops remained opened, there were reports of clashes between workers of the state’s ruling Congress and the BJP.

In the national capital, where most main markets were open but app-based cabs were off the roads, tension spiralled when the ruling Aam Aadmi Party (AAP) alleged that the Delhi Police had put chief minister Arvind Kejriwal under house arrest. City police denied the claim but the party stuck to its guns and said the move was a response to Mr Kejriwal meeting protesting farmers at the Singhu border, the main access point for those coming to the city from Punjab. “No one has been permitted to leave or enter his residence… When our MLAs went to meet the chief minister they were beaten and thrown on the streets,” said party leader Saurabh Bhardwaj.

All India Kisan Sabha general secretary Hannan Mollah described the shutdown as a show of strength by the farmers. “We are standing by our demand that we want a complete repeal of the three laws and will not accept any cosmetic changes. If our demands are not met, we are ready to take our agitation to the next level,” Mr Mollah said.