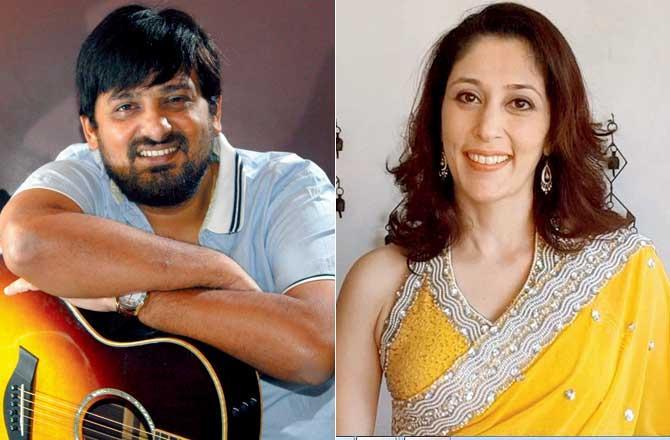 Late music composer Wajid Khan’s wife, Kamalrukh Khan opened up about her alleged ordeal within her inter-caste marriage, claiming she was subjected to “scare tactics” and was made an “outcast” by her in-laws due to her interfaith marriage.

Wajid Khan (of composer duo Sajid-Wajid) passed away in June due to a kidney ailment. Almost six months after his death, his wife Kamalrukh, who is a clinical psychotherapist, opened up in an Instagram post about her ordeal.

“I am Parsi and he was Muslim. We were what you would call “college sweethearts”. Eventually, when we did get married, we married for love under the Special Marriages Act (an act that upholds the right to practice one’s own religion post marriage). And this is why this current debate surrounding the anti conversion bill is so interesting for me. I want to share my ordeal and my experience in an inter caste marriage – that in this day and age, a woman can face such prejudice, suffering and discrimination in the name of religion is a complete shame…and an eye opener.”

“My simple Parsi upbringing was very democratic in its value system. Independence of thought was encouraged and healthy debates were the norm. Education on all levels was encouraged. However, post marriage, this same independence, education and democratic value system was the biggest problem for my husband’s family. An educated, thinking, independent woman with an opinion was just not acceptable. And resisting the pressures of conversion was sacrilege. I have always respected, participated and celebrated all faiths. But my resistance to convert to Islam drastically widened the divide between me and my husband, making it toxic enough to destroy our relationship as husband and wife, and his ability to be a present father to our kids. My dignity and self respect did not permit me to bend backwards for him and his family, by converting to Islam.”

Kamalrukh further wrote that, even after Wajid’s untimely death, the “harassment from his family continues”. “Conversion was not a value system I believed in personally. It was also not the example of a deep set rotten patriarchy that I wanted to set for my beautifully evolved children- my 16-year-old daughter Arshi and my 9-year-old son Hrehaan.”

“I fought this terrible way of thinking tooth and nail throughout my marriage. The result- being outcast from my husband’s family, scare tactics to make me convert included taking me to court seeking divorce. I was devastated, felt betrayed and was emotionally drained, but my children and I held on.”

Kamalrukh further said though her husband was a gifted musician, she wished he dedicated more time to the family, “devoid of religious prejudices, the way he did while creating melodies.”

She wrote, “Wajid was a super talented musician and composer who devoted his life to making melodies. My children and I miss him dearly and we wish he had dedicated more time to us as a family, devoid of religious prejudices, the way he did while creating his melodies. We never got to be a family due to his and his family’s religious fanaticism. Today post his untimely death, the harassment from his family continues.”

“I stand fighting for the rights and inheritance of my children which have been usurped by them. All this because of their hatred against me for not converting to Islam. Such deep-rooted hatred that even death of a loved one could not move.”

“I truly wish this anti-conversion law is nationalised, reducing the struggle for women like me who are fighting the toxicity of religion in inter caste marriages. We are bad mouthed, and labelled as being manipulative and greedy for standing our ground. The real enemy in this conversion cycle commences right at the start – the hate campaign against “other religions”. To declare in public space that one’s own religion is “the only true religion” and that one’s own god/prophet is “the only true god/prophet” is obnoxious. Religion should be a cause for celebration of differences not separation of families.”

“This debate regarding the anti conversion bill should also delve deeper into the patriarchal mindset – it is mostly always the women who are made to forcibly convert. The conversion campaign has to be recognised for what it is – spreading hatred against different religious ideologies, separating wives from husbands and children from their fathers.”

“All religions are the path to the divine. Live and let live should be the only religion we all practice,” Kamalrukh Khan concluded.

Also Read: Salman Khan looked up at the sky and started crying upon hearing the news of Wajid Khan’s death, reveals Sajid

Several Instagram users, including celebrities namely – Ashoke Pandit, Kangana Ranaut reacted to Khan’s post. Ashoke Pandit commented, “It’s really heart-wrenching. Kudos to you for fighting this battle all alone against those who don’t believe in humanity. After going through the entire story one feels the law against forced conversion is a must. More power to you [sic].”

Reacting to Kamalrukh Khan’s post, Kangana Ranaut, in a series of Tweets, posed a question to Prime Minister Narendra Modi regarding how our nation is protecting minority communities like the Parsis, which do not seek sympathy by creating tension and which are decreasing in numbers.

Parsis are the genuine minority in this nation, they did not come as invaders they came as seekers and gently requested for mother India’s love. Their small population have hugely contributed to the beauty- growth and economy of this nation ( cont) https://t.co/5hkLcKSeEy

The actress wrote: “She is my friend’s widow a Parsi woman who is being harassed by her family for conversion. I want to ask @PMOIndia minority that don’t do sympathy seeking drama, beheadings, riots and conversions, how are we protecting them? Parsis shockingly decreasing numbers.”

Reveals India’s own character as a mother, child who does most drama unfairly gets most attention and advantages. And the one who is worthy, sensitive most caring and deserving ends up being a nanny to the one who keeps throwing fits…. we need to introspect #anticonversionbill

Griff on New Music, Making Her Own Clothes, and Her Epic Brits Performance