Legacy challenges have only grown in scale, intensity: Gen. Naravane 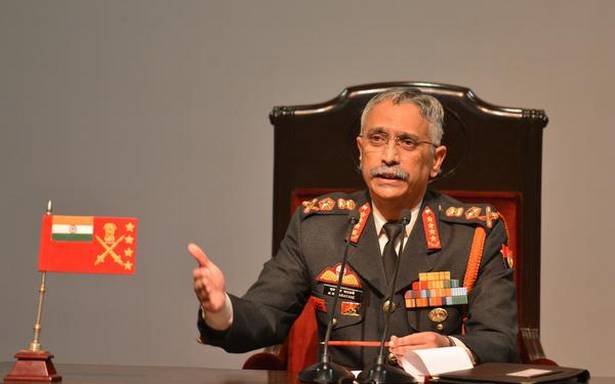 While there are newer threats on the horizon, the hard reality is that legacy challenges have not quite gone away, and they have only grown in scale and intensity, Army Chief Gen Manoj Naravane said on Thursday, as India and China began disengagement to end the nine-month long standoff in Eastern Ladakh.

“Ongoing developments along our Northern borders should cause us to ponder over yet another reality, the nature of our unsettled borders and consequent challenges with regard to the preservation of our territorial integrity and sovereignty… While the Indian Army will continue to prepare and adapt to the future, the more proximate, real and present dangers on our active borders cannot be ignored,” Gen. Naravane said at a webinar organised by Centre for Land Warfare Studies.

Gen. Naravane said the principal challenge before them today was the “growing capability enhancements in an era of finite budgets”.

“There are no easy answers. Our structures, inventories and human resources will need to adapt and transform accordingly,” he stated.

Highlighting the growing challenges posed by adversaries in stand-off deterrence, Gen. Naravane stressed the need to develop capacities to strengthen our anti-access prowess, as also develop proficiencies to overcome the anti-access capacities of the adversary. “The establishment of the Defence Cyber Agency and the Defence Space Agency underscores our intent to leverage these new domains of warfare,” he said.

Talking of futuristic technologies, Gen. Naravane referred to Swarm of Offensive Drones, based on autonomous and artificial intelligence, to neutralise enemy mechanised columns deep inside enemy territory. At the Army Day parade in January, the Army had demonstrated such swarm drones for offensive purposes, which Gen. Naravane said was a message to our adversaries, that “the Army is steadily inducting niche capabilities to enhance our combat proficiencies in multi-domain operations”.

Concurrently, the Army was also working towards penetrating the anti-access bubble of adversaries by “investing in long range vectors, as also through the smart leveraging of our aircraft and aerial platforms,” he added.