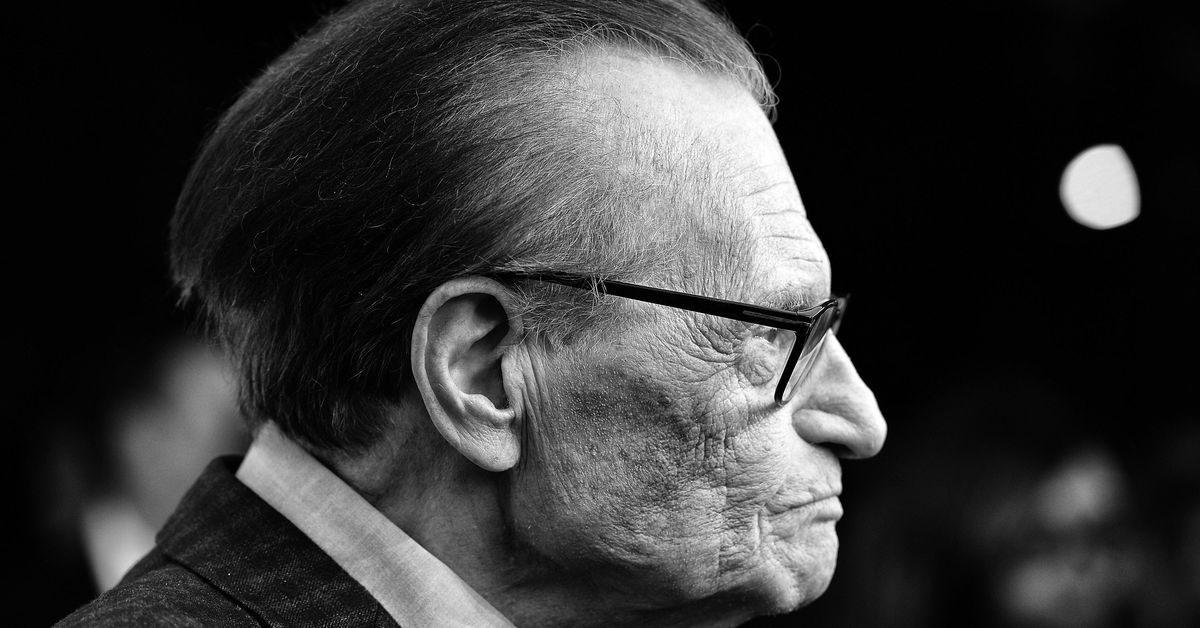 The broadcast journalist Larry King, known for his in-depth interviews and signature style, has died at age 87. His production company, Ora Media, announced King’s death in a statement posted to Twitter Saturday morning.

King died at Cedars-Sinai Medical Center in Los Angeles, according to the Twitter statement. A cause of death was not given. King had been admitted to the hospital with Covid-19 symptoms in December 2020.

King hosted Larry King Live on CNN for 25 years. More recently, he hosted Larry King Now and Politicking with Larry King on Hulu and RT America. These were produced by Ora TV, which he co-founded with the Mexican billionaire investor Carlos Slim.

“For 63 years and across the platforms of radio, television and digital media, Larry’s many thousands of interviews, awards, and global acclaim stand as a testament to his unique and lasting talent as a broadcaster,” reads the statement. “Larry always viewed his interview subjects as the true stars of his programs, and himself as merely an unbiased conduit between the guest and audience.”

King became iconic for his preferred interview style: Long exchanges in which he asked straightforward questions in a raspy, Brooklyn accent. According to a CNN remembrance broadcast Saturday morning, King interviewed more than 50,000 people across 60 years, including US presidents, world leaders, celebrities, athletes, and more esoteric people like psychics, conspiracy theorists, and those convicted of crimes.

And he was perhaps equally known for his bold sartorial choices — he was rarely seen without his signature suspenders, often paired with a bright shirt and colorful necktie.

King was born Lawrence Harvey Zeiger to Jewish immigrant parents in 1933 in Brooklyn, New York; he began his career in radio. After changing his name, King worked first in local markets in the Miami area, before joining a national radio broadcast with the now-defunct Mutual Broadcasting System in 1978. The Larry King Show aired there until 1994.

In 1985, he joined CNN and launched Larry King Live, a show that made him a household name and regularly had viewership of over one million people per night.

Guests on that show frequently made news. Oprah Winfrey called on then-Sen. Barack Obama to run for president on his program in 2006. And in 1992, the billionaire Ross Perot said in an interview with King that he would run for president if his supporters could land him on the ballot in all 50 states. Perot went on to run upstart populist campaigns in both 1992 and 1996.

Over the years, he was married eight times to seven women and had five children. Two of his children died in August of 2020. King was unmarried at the time of his death.

He also had health issues, including quintuple heart bypass surgery following a heart attack in 1987. More recently, he underwent surgery to remove a cancerous lung tumor in 2017, and had a stroke in 2019 that left him occasionally using a wheelchair.

Nevertheless, he pledged never to retire.

On Twitter, fellow broadcasters and other supporters paid tribute to King as news of his death spread.

Just heard the awful news about Larry King. He taught me so much. He was a true mensch. He probably even taught me that word.
So long pal, thanks for all the laughs. Say hi to Rickles. #RIPLarryKing

Such a great headline about #LarryKing in NYT – it shows he had so much breadth..unlike some who can only interview one type of guest (eg politicians), Larry could interview ANYONE and he did and he interviewed EVERYBODY pic.twitter.com/bCCQO5fP6w

Larry King was a Brooklyn boy who become a newsman who interviewed the newsmakers. He conducted over 50,000 interviews that informed Americans in a clear and plain way.

New York sends condolences to his family and many friends.