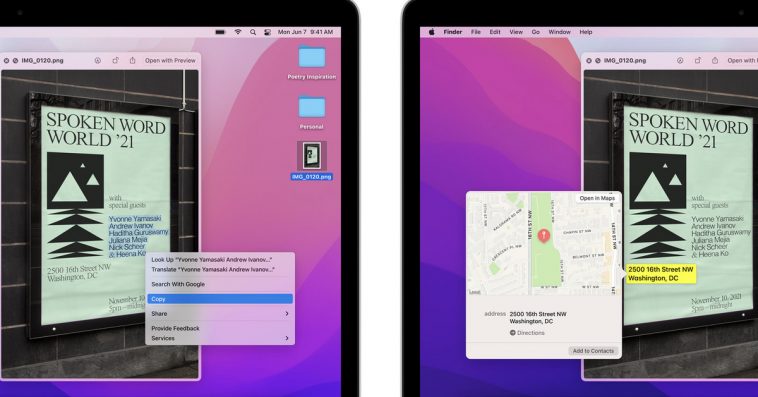 Apple is expanding which devices can use one of its previously M1-chip exclusive features in the fourth macOS Monterey beta. Live Text, the company’s new image scanning and text identifying feature, now runs on “all Mac computers that support macOS Monterey,” according to new documentation Apple released. As tech video creator Rene Ritchie notes, that should mean Intel-based Macs. One user claims to have gotten it to work on a Mac Pro from 2008.

Live Text digitizes the text found in photos, allowing for smart features like making information like phone numbers and addresses searchable and interactive in Apple Photos and the Camera app. The new feature was one of several macOS Monterey highlights that Apple limited to its newer MacBook Airs, Pros, and iMacs, marking the company’s first real break in functionality between Macs running its custom-designed chips and those with Intel processors. Now that might no longer be the case.

Live Text is no longe exclusive to M1-devices in Apple’s fourth beta.

Support for all devices that officially run Monterey should include Macs from as far back 2013, based off Apple’s preview page. One thing that might have made it easier to bring Live Text to Intel: the Mac and iPhone use the feature in different ways. As Ritchie notes, the iPhone can process text live in-camera, a more demanding task than just analyzing a still photo. Since Macs don’t have an elaborate camera array to scan photos on the fly, they theoretically have a simpler time.

MacOS Monterey will be released this fall, but if you’re interested in trying out Apple’s beta software (ideally not on your main device), you can follow our guide.