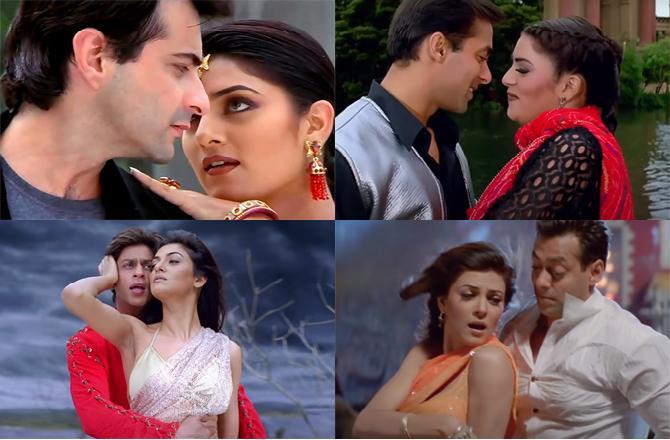 Sushmita Sen is an actor who has lived her life on her own terms. And no, you cannot call it My Way or the Highway. Her aura is intimidating and when she speaks, you’re hooked to what she thinks and how she reflects her thoughts. There’s a lot more to this actor than being the first Miss Universe from India, unarguably her greatest moment of glory, in 1994, at a mere age of 19.

It has been over 25 years at the movies and she made a solid return to acting with this year’s web-series, Aarya. Sen should also be credited for giving fans some of the most breathtaking moments in films through her songs, all infectious and contagious, filled with madness and melody. Here are some of the best ones the nation will never forget:

The film was entirely shot in India but the song was shot abroad, as it happened back in the good old days of Bollywood. It’s a dream sequence where Sushmita Sen is dancing for Sanjay Kapoor as she has fallen in love with him. It could have been the story of a boss and an employee had he reciprocated, but he didn’t. But despite his callousness, Kapoor couldn’t help but get swayed by her thunderous moves and smoldering persona, and it became an anthem and a raging success, thanks to Nadeem-Shravan’s understanding of melody. The remix that happened 2 decades later is not as pulsating.

This was Sirf Tum in reverse. The Boss was a man and the employee was a woman. Well, not exactly an employee but Sen played a model who’s under a contract with Salman Khan‘s company. The song comes right after his wife has discovered his infidelity. Both Khan and Sen danced nonchalantly to the beats of this very likable song with a touch of the Punjabi flavour. Chunari has always been lucky for Salman, history says so.

The world says Sushmita Sen never looked as stunning as she did in Farah Khan’s directorial debut. After falling in love with her employee (Sanjay Kapoor) and her boss (Salman Khan), she now found herself falling for her student, albeit 10 years elder in age (Shah Rukh Khan). There’s a spectacular moment in the film where Amrita Rao tells her Ram (SRK) is elder than her. She shies and says he’s still her student. Equally spectacular was the manner in which Farah Khan staged her songs, particularly this one. A classroom set is created where Khan and Sen romance and set the screen on fire. It’s sensual but never voyeuristic. It knows how to gratify and titillate but without resorting to gratuitous skin show.

The singer has to be as soothing as the actor is stunning. This is a song that brings back the memories of watching actors dancing their heart out after being inebriated. Sen displayed an impressive knack for comedy in this David Dhawan film, but to sign her for a film and not judiciously exploit her scorching presence is a disgrace to the actress. The orange Saree seems to be lucky for Bollywood, and right from Mohra to Maine Pyaar Kyun Kiya, the legacy lives on.