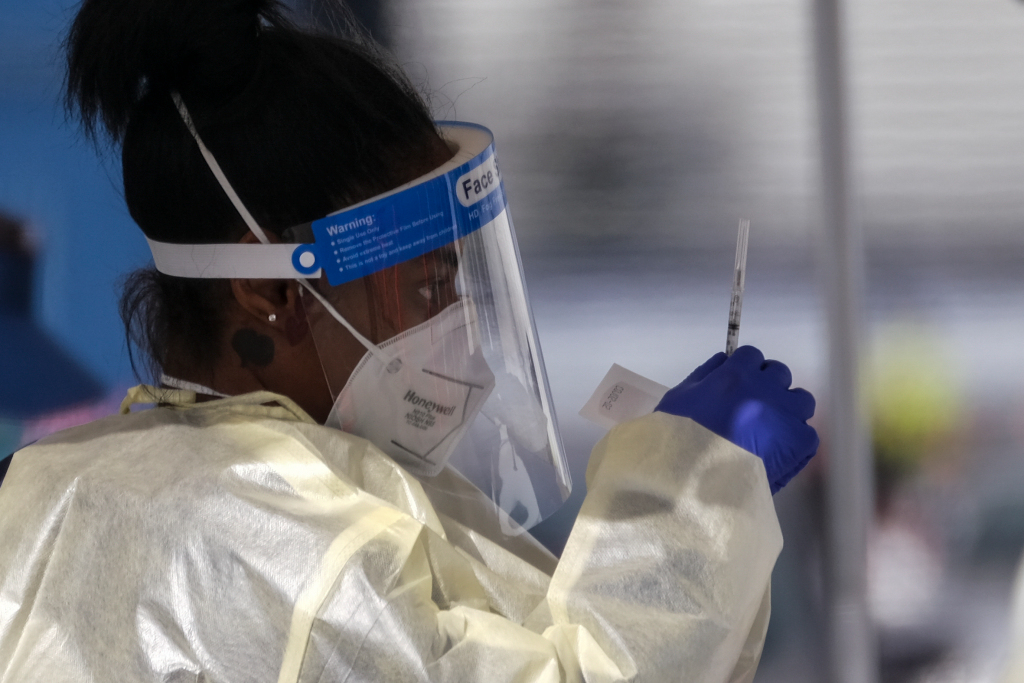 There was good news and bad news on the LA Covid-19 front on Friday. On the one hand, the key numbers were down virtually across the board. On the other hand, with virus variants worrying officials and the region’s vaccine rollout sputtering, there was concern of another surge.

“Cases have peaked at about 15,000 a day and now appear to be on the decline,” said Los Angeles County Chief Science Officer Dr. Paul Simon.

The daily number of Covid-19 deaths reported by the county remained elevated, with 256 fatalities announced Friday. It was the third straight day the number topped 200, with 262 fatalities reported on Wednesday and Thursday.

The county also reported another 9,277 cases, but health officials noted Thursday that the average daily number of new cases had dropped 30% in the past week.

Most recent figures provided from the state showed 7,073 people hospitalized in the county, including 1,687 in intensive care. That’s a significant drop from the 8,000-plus patients that were reported in early January and gave hope that the number of virus hospitalizations would drop below 7,000 for the first time this year.

“Despite these promising trends,” said Simon, “I do want to emphasize that the numbers of cases, hospitalizations and deaths remain far too high. So while there’s reason to be hopeful, we all must remain vigilant and continue to be disciplined.”

Simon also noted that, despite the triumph of 7,730 vaccinations Thursday at Dodger Stadium earlier this week, the county was struggling to administer vaccines. He blamed a shortage of doses on hand and continued uncertainty about future allocations. He noted that the county’s large-scale vaccination sites that opened this week — each capable of administering 4,000 shots per day — will be operating at much lower capacity next week, likely just 2,000 to 2,500 vaccinations a day. Why?

The county expects to receive about 143,900 more doses of vaccine next week. However, since people need to receive two doses of the medication, spaced three to four weeks apart, the bulk of the vaccine coming next week will be used to administer second doses to people who have already received the first shot. Public Health Director Barbara Ferrer estimated earlier that only 37,900 of the doses coming next week will be available for people to receive their first dose.

Simon said Friday that the most recent figures showed that 441,140 doses of vaccine have already been administered in the county, although he said that number is likely much higher due to delays in tallying vaccination totals. As of this week, the county had received about 853,000 total doses.

Simon said people should not look at those numbers and assume there are 400,000 unused doses in the county, noting again the lag in vaccination reports and the daily administration of doses. He also noted the need for much of the medication to be used as second doses for people who have already
received the first shot.

If the county’s weekly allotment doesn’t dramatically improve beyond the current average of about 150,000, “the vaccination effort will likely extend well into 2022,” said Simon.

“We are hopeful vaccine production and shipments to California will increase,” he said. “We have a new federal administration that has pledged to make this happen. We are also hopeful that several other vaccine manufacturers will receive federal authorization for emergency use of their vaccines in the coming months, and that should help increase supplies to California and ultimately to Los Angeles County.”

He said if the county can get its allocation increased to 500,000 per week, “we would have the potential to reach 75% of the adult population in the county, or 6 million adults, by mid-summer.”

In the meantime, he urged patience, saying, “We do understand how important it is to get vaccine out as quickly as possible.”

Even with the falling Covid case numbers and hospitalizations, the imperative for a quick vaccine rollout was underlined by mounting reports about new virus variants — some in California — that may be more infectious and, potentially, less susceptible to the current vaccines.