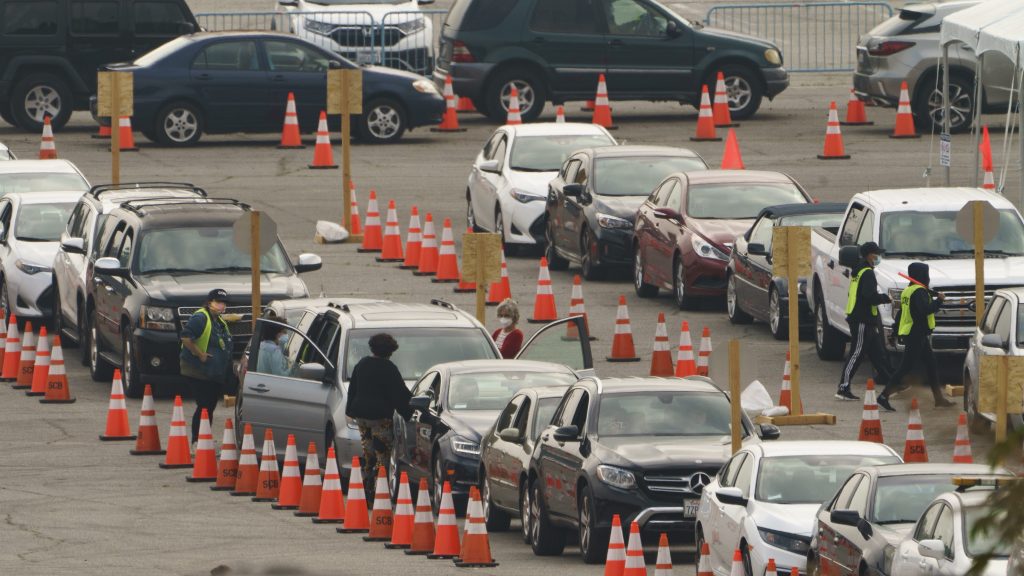 UPDATED with latest: Los Angeles Mayor Eric Garcetti says the city tomorrow will exhaust its supply of first-dose Moderna COVID vaccines, and as a result, the Dodger Stadium vaccination site and other city sites will be closed Friday and Saturday.

“This week we only received 16,000 new doses. That’s about the number of new doses we give out every single day,” he said. “That is down 90,000 from the week before. That is unacceptable.”

“I’m not here to point fingers,” said Garcetti, who was a fundraising chair for the Joe Biden Presidential Campaign. “As always, I’m here to be a partner. But I want to be clear: Los Angeles needs more doses.”

“In a briefing from our county partners this morning,” said the mayor, “we learned that other cities with smaller populations are receiving more doses than our entire county with a larger population. When we look to places that have lower cases, we see 50% more doses going to other cities. I don’t want to take a single dose away from them, but if only fair that Los Angeles gets a steady supply to meet the moment of our need.”

It was unclear if the shortage also impacts L.A. County vaccination sites, but Garcetti’s announcement comes just hours after county officials announced they would expand the pool of residents eligible for vaccines, even though only 20% of seniors have had their first shot. County officials did not mention a similar massive shortage in the region.

PREVIOUSLY: Even though they have been a priority for weeks now, only 20% of Los Angeles County residents aged 65 and over have received even one dose of Covid-19 vaccine, according to county health officials.

And though supplies of the medication remain woefully low, Los Angeles County will expand vaccinations to an array of essential workers in two to three weeks, including teachers, Public Health Director Barbara Ferrer said Wednesday.

The move follows a call by Governor Gavin Newsom in late January for shots to be offered to workers in three categories: education/child care; food and agriculture; and emergency services and law enforcement.

In Los Angeles County, those categories represent roughly 1.3 million people, meaning that even after they become eligible for the shots, it will take weeks to get all of them fully vaccinated, which requires two doses spaced out by three to four weeks.

The expansion of the vaccine eligibility will occur even as the county announced it would only be administering second doses this week due to vastly inadequate vaccine supplies.

Newsom said the state will receive 1.2 million doses this week. Only 540,000 of those are first doses, however. The majority have already been assigned as second doses. “We need to see more doses coming into the state to keep these sites up and running,” said Newsom.

On Monday, Ferrer said LA’s situation was even more desperate. For the remainder of this week at County vaccination sites she said, “All we’re able to offer is second dose appointments.” In a county of 10 million with new variants circulating, that’s a problem.

What’s worse, about 6,000 doses of Pfizer vaccine were potentially spoiled at the Soka University Super POD vaccination site in Aliso Viejo on Wednesday due to a malfunctioning refrigerator.

Asked about the wisdom of expanding the pool of recipients given the supply issues and outstanding need among currently-approved recipients, Ferrer said, “We’re trying to follow along with what’s happening across the state…In some counties, smaller counties or smaller cities, they’ve been able already to start vaccinating in those sectors, and they also have not completed vaccinations for all of their folks who are 65 and older.

“At this point, we’d like to make significant inroads into getting people who are older vaccinated,” she said. “Our hope is that over these next two weeks you’re going to see that number go way up in terms of the number of older people who are getting vaccinated. But also it’s an acknowledgement
that we do have to get started with some of our essential workers. It’s gonna be really difficult to wait weeks and weeks and weeks until we complete an entire sector before we move on.”

Representatives from an array of sectors have been pressuring state and local officials to make the vaccines available, creating what Ferrer conceded was a difficult process of deciding who will come first. The issue of getting teachers vaccinated has become a major issue in recent days amid pushes by Gov. Gavin Newsom and some local officials to get students back in classrooms. But Los Angeles Unified teachers and the superintendent have said teachers and staff need to be vaccinated before that can happen, despite the director of the Centers for Disease Control and Prevention saying otherwise.

Ferrer pointed out Wednesday that 1,700 schools opened last fall in the county with limited numbers of students, and another 300 are operating under a waiver program that allowed younger students to return to campuses, and “we saw very few outbreaks” of the virus, and those that did occur were small
and easily contained.

The county reported another 141 deaths due to the coronavirus Wednesday, lifting the overall death toll to 18,500.

Another 3,434 cases were also reported, raising the total number from throughout the pandemic to 1,155,309.

Deaths and cases have been trending downward in recent weeks as the county recovers from the winter surge in cases, as have hospitalizations. According to state figures, there were 3,772 people hospitalized due to COVID in Los Angeles County as of Wednesday, and 1,105 people in intensive care. That’s a dramatic drop from early January, when there were more than 8,000 people hospitalized.

Ferrer said the decline cases is hopeful, but she tempered the optimism.

“Our optimism around this decrease is cautious,” she said. “The number is still more than three times the average daily case rates we were reporting in September. And also, we’re at a time of the year when people may be more tempted to gather. It’s our hope that all residents are choosing to not get together with people from outside their household or to travel to celebrate the Lunar New Year, Valentine’s Day or Presidents Day.”