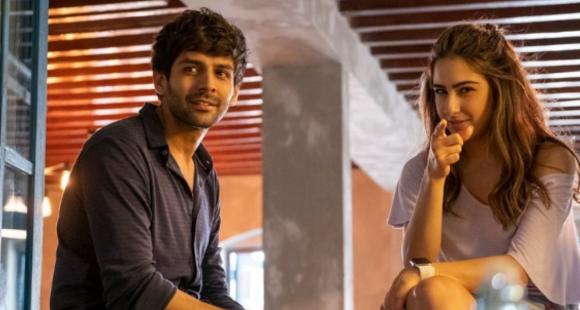 Imtiaz Ali’s directorial Love Aaj Kal starring Sara Ali Khan and Kartik Aaryan has completed one year of its release today. To mark the event, we have compiled some of the best behind the scenes pictures and videos from the sets. Check it out below.

Love is in the air as people all over the world are celebrating Valentine’s Day today. People are surely leaving no stone unturned to make their partners, better halves and close ones feel special today. Notably, be it any occasion it remains incomplete without Bollywood songs and films. Since today everyone is celebrating Valentine’s Day, there are many films that were released on 14 February to celebrate the spirit of love. One such film is Imtiaz Ali’s 2020 directorial Love Aaj Kal that featured Sara Ali Khan and Kartik Aaryan in the lead roles.

The film shows love stories of two different eras -— the first set in the late 1980s–early 1990s and unfolds between Raghu played by Kartik and Leena (Aarushi Sharma). The other love story, set in the present time, is of Veer (Kartik Aaryan) and Zoe (Sara Ali Khan). To note, the first time ever the Sonu Ke Titu Ki Sweety star played two distinct characters from different eras on the silver screen. Though the film is loved for multiple reasons, it was Sara and Kartik’s crackling chemistry that set the tongues wagging and was one of the main highlights of Imtiaz Ali’s directorial.

Even before hitting the theatres, the film created much buzz on social media, thanks to the pictures and videos that surfaced online from the sets. To create curiosity about the film amongst the audience, Sara, Kartik and Imtiaz often used to share a glimpse of behind-the-scenes fun via posts on their respective social media handles. Going by them, it is quite evident that the entire cast and crew of the film had a blast while filming Love Aaj Kal. As this film clocks one year today, we bring to you some of the best BTS fun from the sets that are all about fun and laughter.

In one of the BTS videos, we can see, Kartik and a couple of boys playing football, during what seems like an outdoor shooting schedule for the film. Suddenly, one of the boys says, “Kartik bhaiya, bhabhi aagayi referring to Sara, who can be seen walking into the frame. Upon hearing this, Sara smiles and pretends to be offended. “Bhabhi kisko bola be? (Who are you calling sister-in-law?)” She was heard asking, walking towards the boys.

Another clip shows the actor going complete filmy wearing beige pants with a sweatshirt and a muffler. Some of the pictures show Kartik, Sara and Imtiaz posing for candid clicks amid picturesque view in the backdrop.

Take a look at BTS posts below: