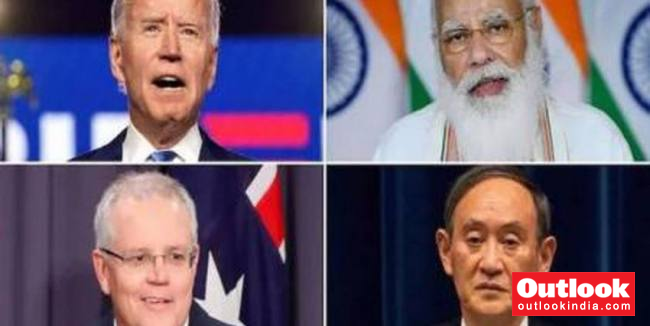 US President Joe Biden said that the Quad virtual summit, which was attended by the leaders of India, Japan, US and Australia, went very well. Known as the “Quadrilateral Security Dialogue,” the Quad grouping comprises the US, India, Australia and Japan. The representatives for the four-member nations have met periodically since its establishment in 2007.

Biden and leaders from the other three countries pledged in the first virtual summit on Friday to work to ensure a free and open Indo-Pacific region and to cooperate on maritime, cyber and economic security, issues vital to the four democracies in the face of challenges from China.

“It (Quad summit) went very well. Everyone seemed to like it a great deal,” Biden told reporters on Sunday in his first reaction on last week’s Quad summit involving leaders from Australia, India and Japan.

In his address to Quad leaders on Friday, Biden had said that it was going to be a vital arena for cooperation in the Indo-Pacific region. He also described Quad as a new mechanism to enhance cooperation and raise mutual ambition as they address accelerating climate change.

“We know our commitments…Our region is governed by international law, committed to all the universal values and free from coercion but I am optimistic about our prospect,” he said, in an apparent reference to China which is flexing its muscles in the region.

“The Quad is going to be a vital arena of cooperation in the Indo Pacific and I look forward to working closely with all of you in the coming years,” Biden told Quad leaders.

The four countries plan to establish a series of working groups that will focus on climate change; critical and emerging technologies, including working to set technology standards and norms and jointly developing some of the critical technologies of the future, officials said.

In a joint op-ed in The Washington Post on Saturday, the four leaders asserted that all countries should be able to make their own political choices, free from coercion.

“To strengthen our quest for a region that is open and free, we have agreed to partner to address the challenges presented by new technologies and collaborate to set the norms and standards that govern the innovations of the future,” they wrote.

The Quad summit, among other things, finalised a landmark initiative under which huge investments will be made in India to create additional production capacities to roll out a billion coronavirus vaccine doses by 2022 for exports to the Indo-Pacific region, seen as a significant step to counter China’s expanding vaccine diplomacy.

“We will combine our scientific ingenuity, financing, formidable productive capacity and long history of global-health partnership to surge the supply of life-saving vaccines, in close collaboration with multilateral organisations including the WHO and Covax Facility,” they wrote.

Emphasising that the Quad nations’ foundations of democracy and a commitment to engagement unite them, the four leaders concluded saying, “We know we can provide for the safety and prosperity of our people at home by confronting global crises together, with purpose? and resolve.”

“We summon from tragedy the strength and resilience to unify and overcome. And we recommit ourselves, once again, to an Indo-Pacific region that is free, open, secure and prosperous,” they said.

The evolving situation in the Indo-Pacific region in the wake of China’s increasing military muscle-flexing has become a major talking point among leading global powers. The US has been favouring making Quad a security architecture to check China’s growing assertiveness.

China is engaged in hotly contested territorial disputes in the South and East China Seas. Beijing has also made substantial progress in militarising its man-made islands in the past few years.

Beijing claims sovereignty over all of the South China Sea. But Vietnam, Malaysia, the Philippines, Brunei and Taiwan have counterclaims. In the East China Sea, China has territorial disputes with Japan.

Both maritime areas in the South and East China seas are rich in minerals, oil and other natural resources and are also vital to global trade.

In November 2017, India, Japan, the US and Australia gave shape to the long-pending proposal of setting up the Quad to develop a new strategy to keep the critical sea routes in the Indo-Pacific free of any influence.

The four leaders are scheduled to meet in person later this year.